EVOS Soul hopes to surprise at M3, like Burmese Ghouls in M2

EVOS SG is lock and loaded for M3. 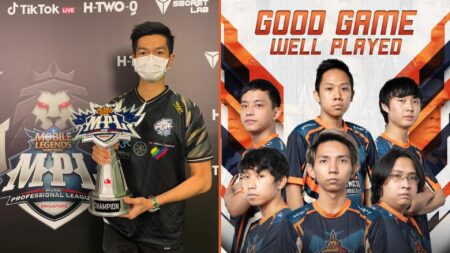 In the post-grand final press conference, Soul was asked about EVOS SG’s chances at MLBB’s grandest tournament, especially after showing such a dominant performance in MPL SG Season 2.

“I think it would still be the same as last year’s M2. There’s always a chance,” he said.

“I think we really put up a good showing in M2, and I hope we can replicate that,” he said. “Like maybe what Burmese Ghouls did in M2. They really showed up and shocked everybody.”

“I can’t really say the chances, but that is what I’m hoping for the team,” EVOS Soul concluded.

Burmese Ghouls had the most dominant playoff run in the M2 World Championship. They defeated Philippine powerhouse Bren Esports and MPL ID champions RRQ Hoshi in the upper bracket to secure the early slot in the grand final.

However, they lost to Bren Esports in the grand final, 4-3 in the best-of-seven series.

Despite the lost, Burmese Ghouls went down in history as the first Esports team in Myanmar to have ever qualified for a grand final at an international MLBB competition.

READ MORE: Every team qualified for the M3 World Championship