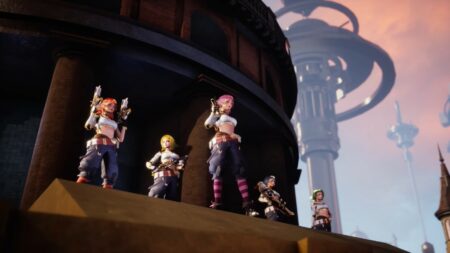 Mobile Legends: Bang Bang is set to release an exciting new game mode to coincide with the release of its newest hero, gun-slinging cyborg gal, Beatrix.

In a video posted on MLBB’s official YouTube, multiple variations of Beatrix with different hair colors can be seen battling it out against giant robots in the city of Eruditio.

Each Beatrix is also armed with different guns for different situations. From rocket launchers that can deal massive damage in a large area to laser guns that can swiftly eliminate hordes of enemies.

The newest mode, which looks similar to survival mode, is called Survival: Nexus and lets all players use Beatrix with one goal — to be the last Beatrix team of two standing on the battlefield.

You’ll start the game with only a sword and you can find different guns by killing jungle monsters scattered across the map.

Aside from the release of Beatrix and the Survival: Nexus game mode, there will also be a new event where you can redeem rewards such as heroes and skins by completing daily tasks.

Players will be able able to use Beatrix and play the Survival: Nexus tomorrow, March 16.