Here’s what happened to TSM at Worlds 2020

“You’re never going to revolutionize yourself in just a month.” 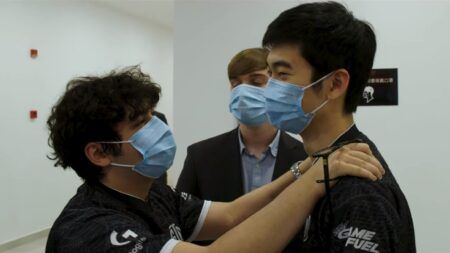 DAMWON Gaming’s championship journey may be the biggest story coming out of Worlds 2020, but many fans and analysts still ponder on what happened with the rest of the participating teams.

LCS top seed TSM was one of the bigger “what if’s” as the tournament went on. With Soren “Bjergsen” Bjerg and the boys failing to get out of the group stage with a 0-6 scoreline, the team went into the dark.

After an early trip back to NA, a few days to rest, and Bjergsen retiring to become the new head coach, the team finally released their side of the Worlds 2020 experience.

The 44-minute documentation explains the troubles of the squad throughout quarantine and scrims. Things from computer and communication issues to just their overall food consumption became a heavy hit for the squad. With less motivation and energy to even do well in scrims, the team entered the group stage with no real game plan.

As the losses started to pile on, things looked bleak for the team. All the players were losing hope for a turnaround match and mostly spent their time lightening the mood with a few jokes here and there.

“When it was over, the room was pretty quiet and it didn’t really feel like there was too much to say at that moment, especially when it’s your first loss in such a big tournament for BB and Spica,” stated Bjergsen. “That is a really hard pill to swallow.”

Doublelift also chimed on his own experiences as a frequent Worlds player, talking about how his group stage curse is a definite mental reality for him and the teams he goes with.

“The huge problem at Worlds is that teams like us go and players let themselves get molded at Worlds and they just get molded in all the wrong ways,” said Doublelift. “You’re never going to revolutionize yourself in just a month. The whole point was to sharpen what you already have so we basically just lost our sharpness.”

While their 2020 run has been bittersweet, TSM is already gearing up to redeem themselves in the 2021 season. With Bjergsen shifting into a head coach role, TSM is still looking for a mid-laner to complete its starting five.

You can watch the 44-minute documentary here: