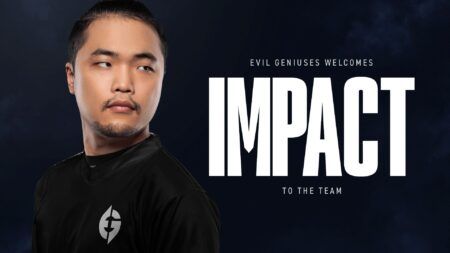 He will be taking over the top lane after EG’s previous dual top set-up of Colin “Kumo” Zhao and Heo “Huni” Seung-hoon.

Impact had a turbulent 2020 season in Team Liquid. While the team finished ninth in Spring and experienced the departure of Yiliang “Doublelift” Peng, the team finally hit its stride in the Summer with Edward “Tactical” Ra getting promoted to starting ADC and Joshua “Jatt” Leesman stepping in as head coach.

Team Liquid managed to enter Worlds 2020 as LCS’ third-seed, but the team’s bot-lane became the main priority for the comeback plays and left Impact in a landlocked top-lane.

Despite not showing much on the stat sheets, Impact fared well against some of the world’s best top-laners with Suning’s Chen “Bin” Ze-bin and G2 Esports’ Martin “Wunder” Hansen.

Evil Geniuses found some success in the Spring regular season but failed to change their usual defeats to more composed teams like Cloud9 and FlyQuest. By the Summer Split, the team tried their luck by substituting Daniele “Jiizuke” Di Mauro and Kumo with fringe mid-laner Greyson “Goldenglue” Gilmer and Huni, but it still didn’t change their status as a mid-table team.

Looking into 2021 Spring, Impact will be pairing up with veteran jungler Dennis “Svenskeren” Johnsen and will see Jiizuke handling the mid lane once again. EG will also be fielding a brand-new bot lane with Lee “IgNar” Dong-geun and EG Academy recruit Matthew “Deftly” Chen.

If Impact is able to bring a heavy top-side presence to the team, Evil Geniuses may have a chance to be a formidable force in the Spring 2021 Playoffs.