The former iG academy player is growing up. 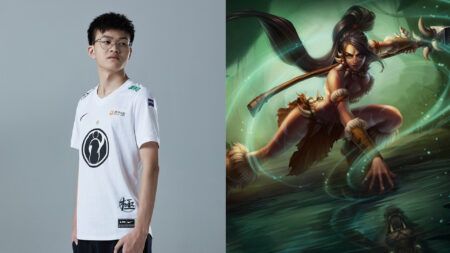 Two new names appeared on the starting roster of Invictus Gaming’s opening game of the 2021 LPL Spring split. One of the names you’ll be familiar with, as Zhang “Wink” Rui was eStar’s bot laner in 2020. The other, you’ve probably never heard of.

In Invictus Gaming’s first challenge of the new year, they went up against Worlds 2020 quarterfinalist JD Gaming, the one team they never won a series against the whole of last year — until now.

Before the match began, fans did not know what to expect of this new roster. Struggling to find a foundation, Song “Rookie” Eui-jin was seen hard carrying the team last year through many of their victories, even as Kang “TheShy” Seung-lok racked up the most deaths in Spring, while Ding “Puff” Wang and Su “Southwind” Zhi-Lin lost 2v2s at bot.

Now that Gao “Ning” Zhen-Ning is on a temporary break, Peng “XUN” Li-Xun is iG’s sole jungler. In game one, iG prioritized him immediately by first-picking Nidalee on blue side. The team’s response to Leona was Galio, followed by Orianna and Miss Fortune who could combo their ultimates.

After a drawn out fight at the first infernal dragon which JDG secured, the tipping point happened eight minutes in. Even though Su “Xiye” Han-Wei knew XUN was in the bush, he stepped up to push the minion wave in and paid with his life.

Working with Rookie, XUN and his veteran mid laner immaculately turned around the follow up 2v2 against Seo “Kanavi” Jin-hyeok’s Graves and Zuo “LvMao” Ming-Hao’s Leona that put iG up by 1,000 gold.

Again on blue side, iG prioritized Nidalee for XUN again in game two. Out of five bans, three were against Rookie, two were against TheShy. Even so, Rookie managed to get his hands on one of his trademark champions, Zoe, which meant poke, poke, poke, and more poke.

Using mid lane priority, the pair roamed top as TheShy’s wave crashed into the turret. After hitting that crucial first spear, XUN and Rookie landed every single skill shot in tempo for the double.

The young jungler wasn’t done showing off his mechanics. Having completed his mythic item Night Harvester, XUN landed a pixel perfect Javelin Toss onto Xiye’s Viktor in mid, who initially looked safe behind the caster minion. Pouncing onto the control mage, XUN got trapped in Gravity Field, which was cue for Rookie to come in to finish off the kill.

With XUN and Rookie running away with both games, Invictus Gaming swept JD Gaming 2-0 for their first victory of the season. Previously, this was their checklist to victory:

Perhaps in 2021, XUN should be added as “a jungler who’s able to sync well with and play around his strong solo laners”. Of course it’s still too early in the season to judge just how far this iteration of iG will go. For now, all we can say is that this is the version of iG that we wanted to see since 2019.

READ MORE: A closer look at how Suning outdrafted Top Esports in week 1 of LPL 2021