Patience was the name of their game. 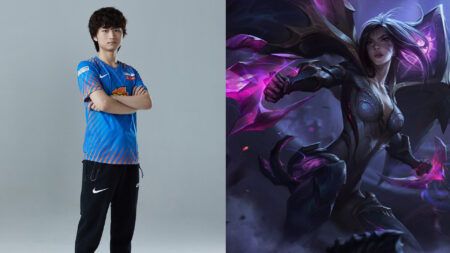 For the first time since January 2020 since the COVID-19 coronavirus outbreak, the LPL has returned to the stage with a live audience. To open the 2021 season, Worlds 2020 finalist Suning went up against the 2020 Summer champions, Top Esports, the very team they eliminated 3-1 in the Worlds semifinals.

Despite last year’s results, the livestream fan vote on Huya favored Top Esports to win by a large margin. Still regarded as one of the best teams the Chinese league has to offer, Top Esports looked like they were getting back in form after winning the 2020 Demacia Cup, where they fielded their newly acquired Team WE academy support Wang “Zhuo” Xu-Zhuo over Liang “yuyanjia” Jia-Yuan.

Unfortunately, even after the departure of playmaker and key shotcaller Hu “SwordArt” Shuo-Chieh on the side of Suning, Top Esports still could not overcome their rivals.

Their draft in game one started off strong, as they picked up top tier champions in their role, Samira, Leona, and Pantheon. In response, Suning blind picked Aatrox, one of the best top laners in the meta thanks to Goredrinker. They also empowered Lê “SofM” Quang Duy early, prioritizing his comfort Nidalee since Graves was banned.

The next two picks in the second ban phase was crucial for both sides. Suning shrewdly chose Galio, who not only could be flexed mid or support, but is also an innately great response to Leona and Pantheon.

In a surprising turn of events, Top Esports opted for Karma top, whose base shield was recently buffed in patch 11.1. Sacrificing the lane, she’s meant to support Samira in team fights while also boosting their engage or disengagements with bonus movement speed and shields.

On red side, Suning utilized the flexibility they gave themselves in draft, and locked in an extremely high value pick in Viktor. Together with Galio and Aatrox, this triangle of champions completely foiled Top Esports’ engage options.

As the game moved from mid to late, it became clear that that every time Top Esports initiated, they lost. Suning worked so well together as one unit, peeling back for Tang “huanfeng” Huan-Feng while Chen “Bin” Ze-Bin’s Aatrox zoned the backline.

The same story repeated itself in game two, albeit with different lineups. Recognizing they needed a more diverse team composition, Top Esports drafted ball carriers Hecarim and Jax alongside Orianna, while bot lane optimized Samira with Alistar. They had team fight wombo combo options but could also rely on Jax to exert side lane pressure in the late game.

Knowing that TES wanted to dive them a second time, Viktor was a no-brainer. Since Galio was banned, they replaced him with Maokai for Luo “ON” Wen-Jun, whose Nature’s Grasp ultimate was primarily used to peel for his ADC.

Looking practiced on their team comp, even though Suning lost one member early on in this 26th minute brawl, they continued to be patient. Instead of fulling disengaging, they positioned in such a way that they could still capitalize on TES mistakes in this 4v5. The second time Zhuo’s Alistar overstepped, Viktor’s Gravity Field was immediately placed down chained into Camille’s Hookshot.

Beautifully followed up by huanfeng, he went in at the perfect time with Killer Instinct for a triple kill and the Ace.

Suning’s collective ability to read their opponents and recognize positioning advantages was commendable in this two-game series. In the very last clash around the sixth dragon, Bai “369” Jia-Hao saw Bin’s Camille isolated.

He jumped onto Camille, but two things happened at the same time: one, huanfeng’s Kai’Sa swooped in with her ultimate for massive late game damage, and two, Maokai’s ultimate zoned off Zhuo “knight” Ding and Hung “Karsa” Hao-Hsuan, who simply could not follow up with their team.

A mistimed Onslaught of Shadows by Karsa meant that huanfeng could flash out after Guardian Angel was popped. Rejoining his team, they kited Top Esports all the way back from river to the outside of their base for the game and series win.

Can Suning maintain their post-Worlds form even without SwordArt this season? Find out as the LPL continues 7 days a week livestreamed on Twitch.

READ MORE: LPL is finally getting a double elimination playoff bracket this Spring 2021