Watch Xiaohu completely turn around a near-death 1v1 on Lucian

Who knew his true Culling is in top lane. 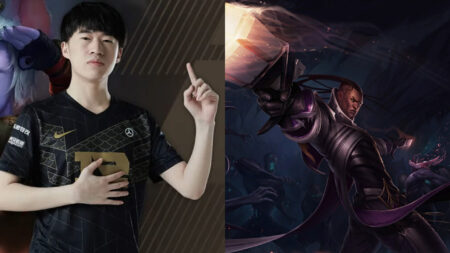 Royal Never Give Up’s Li “Xiaohu” Yuan-Hao may have been a mid laner all his life, but maybe his true calling has been in top lane all along.

In his debut LPL season as a top laner, he has been extremely clutch on tanks and ranged carries like Tristana. Dubbed “this split’s TheShy except without running it down” by English LPL shoutcaster Joe “Munchables” Fanny, Xiaohu’s mechanics and macro play is a big factor why Royal Never Give Up finished first.

In this final week of the regular season, RNG may already have locked first seed, but the team is still determined to rack up wins.

After taking game one, RNG found themselves trailing in game two against 7th place team, Rare Atom. On another AD carry pick, Xiaohu’s Lucian had pushed the wave at top lane.

Strolling in the jungle, Dai “Cube” Yi surprised him from an unwarded bush, pouncing on him in Hammer Stance. In retaliation, Xiaohu managed to get off a number of auto attacks, one Piercing Light (Q), and one Ardent Blaze (W) to trigger Lightslinger’s passive, but still felt short compared to Jayce’s initial burst which brought him down to 10% HP.

Edging around the corner into the lane, Xiaohu finally managed to create space with Relentless Pursuit (E) into The Culling. Thanks to his Refillable Potion, Xiaohu’s Lucian narrowly survived Jayce’s final Thundering Blow on 7HP before finishing him off.

The 2021 LPL Spring playoffs will begin in April.