He’s such a god when it comes to Bard. 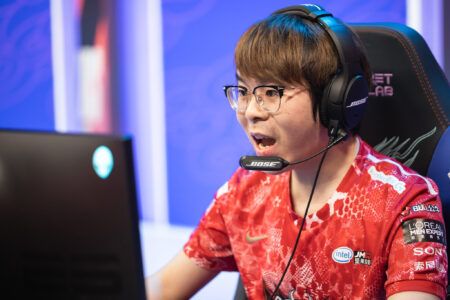 The League of Legends World Championship (Worlds) 2020 Group Stage Day 6 saw the rise of LPL and LCK teams JD Gaming and DAMWON Gaming over Rogue and PSG Talon. JDG concluded the Group B matches with an upset against the LCK Summer Champions.

Support player Zuo “LvMao” Ming-Hao’s accurate play on Bard impressed everyone, especially on his flawless use of the Wandering Caretaker’s ultimate ability.

As JDG was being chased down, Zeng “Yagao” Qi’s Twisted Fate got separated from the bunch where Cho “BeryL” Geon-hee’s Alistar and Heo “ShowMaker” Su’s Galio caught up to him. LvMao attempted to save the mid laner by taking a shortcut in his Magical Journey tunnel just past the Baron Nashor cave.

BeryL slowed down the pair by casting Headbutt then Pulverize, which sent Yagao airborne. Showmaker was about to follow up this initial attack with a taunt through Shield of Durand when LvMao cast his pixel-perfect Tempered Fate, accurately putting BeryL and Showmaker in a stasis while successfully separating Yagao to save him from danger.

With this insane play, JDG was able to turn the tables and surround DAMWON through Yagao’s Destiny. The LPL Spring champions finished the clash by picking off Jang “Ghost” Yong-jun’s Kalista and BeryL.

This isn’t the first time that LvMao’s Bard has saved the day, as he also landed a four-man Tempered Fate against TOP Esports back in May, which helped JDG clinch their first LPL championship.

Still not convinced that JDG is legit? We listed down all the reasons why you should support JD Gaming this Worlds 2020.