Who will make it to the knockout stage? 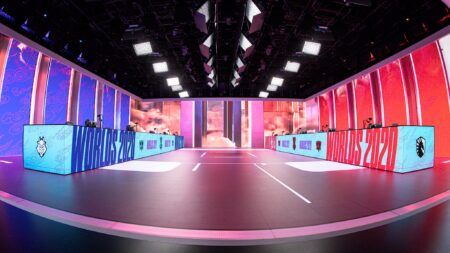 The League of Legends World Championship (Worlds) has wrapped up the first round-robin of the group stage.

With easy wins and upsets throughout the past four days, let’s take a look at who’s dominating in their groups.

LEC’s G2 Esports and LPL’s Suning are currently tied for the top spot in Group A. While G2 was able to turn things around and score a win over Suning, the team conceded their first loss after a thrilling upset against Team Liquid.

PCS’ Machi Esports is tied with Team Liquid, but with TL stepping up in their game against G2, they might have some trouble taking another win over Mads “Broxah” Brock-Pedersen and the boys.

DAMWON Gaming came through as the unstoppable force in Group B. With no mercy, the team first powered through LPL superteam JD Gaming and handed out losses to the rest of the group.

With PCS’ PSG Talon sporting a 0-3 record, it’ll take some clever plays and some miraculous upsets for the squad to have a chance to qualify for the knockout stage.

As the only group with a three-way tie, things are looking pretty interesting in Group C. With Fnatic taking two wins over Gen.G and TSM, the team looks more than ready to conquer the second round-robin.

At the bottom of the group, TSM has lost its spark with a 0-3 record and might be ready to book a plane ride home. If TSM manages to go perfect for the second round, the group would be looking at some pretty intense tie-breakers between all four teams, but we don’t see it happening.

Group D is playing out pretty much how we expected, with LPL superteam TOP Esports staying undefeated after three matches.

DRX is currently positioned in second-place with some comfortable wins over LCS’ FlyQuest and CIS’ Unicorns of Love. If FlyQuest is planning to overtake Korean young-bloods, they’ll have to beat DRX and UOL and hope that UOL takes a unlikely win over DRX.

The second round-robin of the LoL Worlds group stage will start on October 8 with Group A.