This system seems to be working. 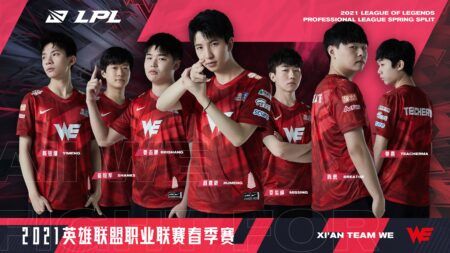 The fourth week of China’s League of Legends Pro League (LPL) just started. At the top of the table stand three undefeated teams, and their names might surprise you — Edward Gaming, Royal Never Give Up, and Team WE, the Demacia Cup 2020 finalist who were swept 3-0 by Top Esports back in December.

Team WE went up against LNG Esports on Sunday. A roster bolstered by the brilliance of former LCK Griffin jungler Lee “Tarzan” Seung-yong, they were on a two-match, perfect win streak.

Surprisingly, Team WE swept them and secured all but one dragon in the series, which lasted no more than 33 minutes per game. Top laner Chen “Breathe” Chen on Gnar, previously known as Curse from OMG, almost dished out the same amount of damage as AD carry Zhao “Jiumeng” Jia-Hao in game one, and was awarded the MVP.

In the post-game interview, he was asked about the reason behind the team’s success. “We have a penalty mechanism so we don’t let-up. We take our trainings very seriously. For example if we don’t buy vision wards or if we make a ridiculous play, [we’ll get fined],” explained Breathe.

English LPL fans showed split opinions on this matter. Some criticized this performance system as bad management, citing that players are human and shouldn’t be subject to such a harsh treatment. Others see it as a form of “Asian style parenting”, and a variant of traditional sports contracts that have inbuilt incentives.

Chinese fans on Weibo had a more lighthearted reaction. Many laughed, and many joked that the MVP rewards are funded by fines, agreeing that money is the ultimate motivation.