The 5 best Battle Academia skins in League of Legends

Class is now in session! 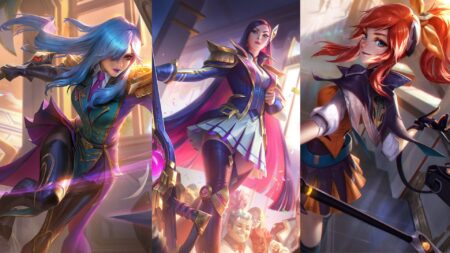 The extraordinary students are back!

With the introduction of new characters in this skin line, League of Legends’ Battle Academia continues to impress summoners and anime fans. Out of the eleven confirmed Battle Academia skins, a certain few have caught our eye.

Only Katarina can pull off wearing an odd pair of thigh-high socks and still look great in school, giving a rebellious vibe that says “Stay away from me,” to all of Durandal Academy.

Instead of carrying a piece of bread in her mouth, Katarina embraces being alone by reading a book as she runs in her Homeguard animation.

Her bright pink hair, purple particle effects, and unique wind screen effect puts her on the fifth spot out of all the Battle Academia skins in our list.

Seeing how Leona is nicknamed the Radiant Dawn and harnesses the power of the sun, it’s quite unusual for us to receive a Leona skin with cool tones and blue and purple hues. However, this color palette works in her new skin.

Battle Academia Leona is now the cool kid in the class with her periwinkle hair and matching giant shield to protect bullied students from flying pencils and paper airplanes as seen from her splash art.

After becoming co-Star Guardians in another skin line, Ezreal and Lux are back together as freshman students at the Durandal God-Weapon Academy. Lux seems to be the ideal mage support to Ezreal’s academic life, training hard to become a flawless sorcerer.

Her Homeguard animation pays homage to the typical school girl anime character who carries a piece of toast in her mouth and runs from her house to the school gates just seconds before it closes.

Lux mains would also notice her new and improved Final Spark animation, with an accompanying echo effect as soon as she finishes screaming “Demacia!” or “By the light!”

Who looks like she just exited the Gainax production studio and is ready to step on someone? Why it’s Battle Academia Caitlyn!

Battle Academia Caitlyn looks like a cross between Kill la Kill’s student council president Kiryuuin Satsuki and Panty & Stocking with Garterbelt’s younger Anarchy sister Stocking. In her lore, Battle Academia Caitlyn is portrayed as the perfectionist class president of the Labrys God-Weapon Academy. Yes, she’s the rich kid in the classroom with the high-pitched, ojou-sama laugh as seen in one of her emotes.

Instead of her usual cupcake, Battle Academia Caitlyn has opted for a custard choice with a plate of jiggly flan featured in her Yordle Snap Trap skill. This Legendary skin is pretty special because it has an added screen visual effect when you use Caitlyn’s Ace in the Hole, where you will see manga speed lines as Caitlyn prepares her shot.

Ezreal best represents the Battle Academia squad with his concept and design — one look and you’ll immediately know that he is the overpowered shounen anime protagonist set to defeat and conquer villains throughout the series.

Red has always been the color of superheroes, and Riot giving Ezreal this color in his school uniform and gauntlet makes him stand out from the rest of thew Battle Academia skins. His blonde hair also turns white, perhaps a reference to Dragon Ball’s Super Saiyan form.

Battle Academia Ezreal’s particle effects are out of this world as well, playing with cool and edgy effects you thought you would only see in a Japanese animated series.

Overall, Battle Academia Ezreal is a very charming skin that both anime fans and League of Legends players can enjoy.