This is his second MVP award. 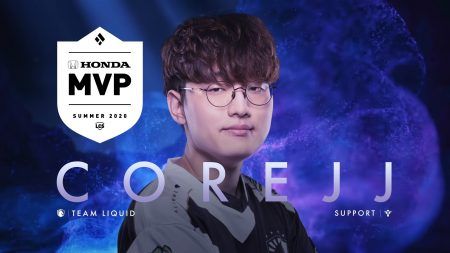 Team Liquid’s Jo “CoreJJ” Yong-in has been named the 2020 Summer Split Honda MVP, the final and the most prestigious award for the league’s best player in the regular season.

This is his second MVP Award with the first coming in Spring 2017.

While the veteran LCK/LCS player has done it all from winning domestic and World championships and claiming MVP awards, CoreJJ still strives to give his team the competitive edge in the role of a support player.

Despite only having a mid-season break to hash things our with ADC rookie Edward “Tactical” Ra, the two ended up leading in their respective roles for the summer. Tactical came in fifth in overall kills (67) while CoreJJ also got fifth in assists (139).

As a team, Team Liquid swept the Summer Split Awards, also taking home Coaching Staff of the Split and Rookie of the Year with Tactical. CoreJJ also came in as the first-choice support player for the 1st All-Pro Team.

While the team were knocked out of the playoffs by TSM, Team Liquid will continue their competitive season into Worlds 2020 as the third-seed of LCS in the Play-In Stage.