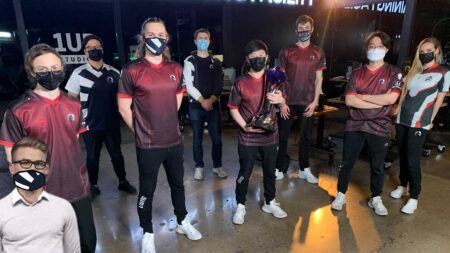 The LCS Lock In ended with an intense best-of-five final between superteams Team Liquid and Cloud9. Despite going to a nail-biting game five, Team Liquid was able to outclass Cloud9 to be crowned as the first-ever LCS Lock In champions.

Team Liquid had a strong start to the entire series, where game one ended quickly thanks to Edward “Tactical” Ra and the TL squad. While the team mainly revolves around the bot lane dynamic of Tactical and Jo “CoreJJ” Yongin, Alphari and Santorin stepped up to offer more on the top side of the map.

Going against Robert “Blaber” Huang’s Udyr, the two did their best to trade favorably. Alphari fumbled a bit by falling into an early 1v2 situation in game one, but the Jax player immediately teleported back to make up for giving first blood.

Supporting his top laner, Santorin is a control-heavy jungler who focuses on keeping the team on objectives. After picking up a 21-minute Baron, the team were sieging C9’s base. In that moment, Tactical flashed in to take out Perkz’s Twisted Fate.

Making use of the 4v5 advantage, Santorin cornered the rest of C9 and put up an elaborate Weaver’s Wall to help his team take down the Nexus.

Game two featured a similar set-up of a Baron power play, but this time around, Alphari was the main offensive playmaker in the final clash.

Even though Tactical is a reliable ADC, Alphari gives the team a broader carry dynamic and provides an edge in playmaking and versatility that can swing team fights around.

In the final clash, Cloud9 was relying on Blaber’s heavily-shielded Olaf to tear through TL’s backline, but Alphari’s Gnar perfectly executed a three-man fling and assisted Tactical in taking out the frontline.

Perkz’s LeBlanc tried to defend the Nexus 1v3, but Alphari quickly secured the ace with a Boomerang Throw, claiming game two of the series.

At championship point, Team Liquid showed some weaknesses when facing poke and disable-heavy drafts coming out of C9.

On the backs of a solid frontline with Fudge’s Malphite and Blaber’s Olaf in game three, Perkz’s Zoe and Jesper “Zven” Svenningsen’s Senna outranged the rest of Team Liquid in game three. With TL on their back foot, C9 took matters into their own hands. They made it a point to take out Tactical first with wombo-combos.

Down to the last game of the series, Alphari’s Gangplank and Santorin’s Udyr realigned their playstyle and dominated the rookie match-up. As first-pick Udyr, Santorin’s job was to support Alphari’s laning phase and choke out anyone at top.

With Fudge on Irelia again, the duo had to wait for Flawless Duet to go on cooldown before entering the fray with Bear Stance, and even opted for turret dives to snowball further.

Applying this constant pressure in the top lane, Cloud9 came to Fudge’s call. However, this left Jensen and Tactical unchecked as they farmed up for late game.

With no real answer from Cloud9, Team Liquid pushed waves into all three inhibitors. After a wild chase down the bot lane, Cloud9 tried to reset and go for a full team clash, but CoreJJ’s Nautilus landed his Dredge Line on Blaber’s Taliyah and fed another kill to his teammates.

Team Liquid jumped on the 4v5 advantage and ran through the rest of the C9 squad. Outnumbered and lacking in any form of damage, all Perkz could do was stand in the fountain as the four remaining TL players destroyed the final Nexus of the series.

Team Liquid went home as the first-ever champions of the new LCS Lock In tournament. The team earned a cash prize of US$150,000 along with an extra US$50,00 for the charity of their choice.

Though the team came close to sweeping C9, TL head coach Joshua “Jatt” Leesman believed that the longer series tested their skills and ultimately made the 2021 line-up a better team.

Though they only had three weeks to prepare, Alphari and Santorin have proven that they’re synergizing well with the current TL roster. While the three mainstays of Jensen, Tactical, and CoreJJ have already shown their world class skills in the previous season, this new top side addition is a well-needed upgrade to bring Team Liquid back to champion status.

Team Liquid and Cloud9 will be back in the 2021 LCS Spring Season starting February 5.

READ MORE: LCS 2021 will put the spotlight on the next generation of players