Watch out Teddy, there’s a new sheriff in town. 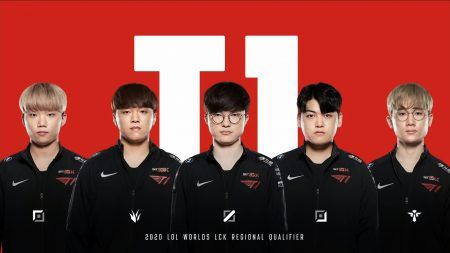 After Afreeca Freecs knocked T1 out of the 2020 LCK Summer playoffs, T1 have found themselves in the novel scenario of having to qualify for Worlds through the LCK Regional Finals.

So it was a huge surprise when T1 debuted new ADC, Lee “Gumayusi” Min-hyeong, in a must-win game against the very same team that eliminated them from the playoffs.

Fortunately, the risky gamble paid off for T1, as they took a comfortable 3-1 victory.

T1 had an incredibly strong start in game one with Faker and Gumayusi racking up some early kills. With a tanky frontline of Kim “Canna” Chang-dong’s Renekton, Ellim’s Jarvan IV, and Faker’s Galio, Gumayusi was able to cash in a ton of free-hits from the back.

In one jungle clash, T1 instantly locked down on AF with a flurry of ults including J4’s cataclysm, Lux’s Final Spark, and Galio’s Hero’s Entrance. Though Kim “Kiin” Gi-in’s Akali flanked from the side, Gumayusi instantly kited him with a net and even picked up a double-kill. With the tanky front-line still looking alive, Faker’s Galio closed out the ace with a kill on Nam “Ben” Dong-hyun and made their way to Baron.

With T1 steadily snowballing throughout the game, things were looking hopeless for Jin “Mystic” Seong-jun and his squad. In a last-chance effort, they did their best to interrupt T1’s capture of the Dragon Soul, but Faker and Gumayusi quickly picked off their members for double-kills and ended game one by the 30th minute.

Now on the blue side, Afreeca went for a double-ADC composition with Lucian and Kalista that looked fairly weak in the earlier stages of the game.

With T1 engaging the Baron at 26 minutes, Faker found himself caught outside of the Baron pit by Kiin’s Lucian and Ben’s Taric. T1 immediately sensed the invasion and took down Song “Fly” Yong-jun’s Syndra.

Though things were going astray for Afreeca, Kiin’s Lucian and Mystic’s Kalista finally locked and kited their way to an amazing ace, shutting down both Gumayusi’s Draven and Faker’s Zoe.

After claiming the Cloud Soul, Afreeca Freecs was ready to rain their skills down on T1 in the mid-lane. With Lee “Spirit” Da-yoon starting the clash with a backward Showstopper, Ben’s Taric came in through Fate’s Call and combined it with Cosmic Radiance and a Dazzle on half of T1.

Kiin’s Lucian immediately followed with The Culling while Mystic’s Kalista claimed a game-ending double-kill. With only Faker left standing, Afreeca stormed the base to tie up the scoreboard.

For the third game, T1 had an early lead through their jungler Ellim and his Lillia. While Gumayusi’s Jhin was picking up some kills, the poking duo of Ezreal and Yuumi was quite tedious for the slow-paced ADC.

In a 2v1 bot-lane skirmish, Ellim’s Lillia came to the rescue with a Swirlseed-Lilting Lullaby combo. With Mystic’s Ezreal and Ben’s Yuumi locked in place, Gumayusi sniped them down with Curtain Call, assisting Ellim in the double-kill.

Now sporting a 13K lead with an Ocean Soul, T1 immediately locked horns with the weak Afreeca squad. Canna’s Renekton sliced and diced his way to break Afreeca’s composition while Gumayusi’s Jhin initiated Curtain Call once again to deal some heavy damage. With the rest of T1 cleaning up for the perfect ace, Faker and his squad sealed their second win of the series.

The fourth and final game was another great display of skill from T1’s side. While things were still pretty even in terms of gold and kills, Fly’s Ornn and Spirit’s Karthus tried to lock Faker down in the bot-lane.

Interestingly enough, Faker did some fancy footwork to evade the Forge God and the Wall of Pain. Though he couldn’t take both champions head-on, he slowly kited them towards Ellim’s Volibear who claimed the double-kill and saved Faker from an easy death.

Despite the jungle differential, AF held their ground in the bigger team clashes. With T1 ushering a Rift Herald in the mid-lane, AF opted to retreat and defend at the next tower.

Kiin’s Wukong did an impressive knock-up with his ultimate, giving enough time for Fly’s Ornn and Ben’s Nautilus for the tanky re-engage. Spirit’s Karthus even followed up with Defile’s AoE damage despite being pulled in by Canna’s Mordekaiser. With Faker’s Sylas stealing Requiem, he cleaned things up with the Karthus ult, only leaving Fly and Ben alive on AF’s side.

Canna’s Mordekaiser had another great highlight in the final clash. As Gumayusi’s Jhin initiated the fight with a Curtain Call, Canna sent Kiin’s Wukong into the death realm and instantly deleted him with a flashing mace smash.

Though Fly’s Ornn delayed the fight with a Forge God, the rest of T1 quickly followed up with a flurry of slows and stuns, handing over a quadra-kill to Canna and winning the series in the aftermath.

T1 will continue their run today and will face their final opponent of Gen.G at 4 p.m.. The winner of the Regional Finals will be the third and final team from the LCK to enter Worlds 2020, the most prestigious cross-region tournament of League of Legends.