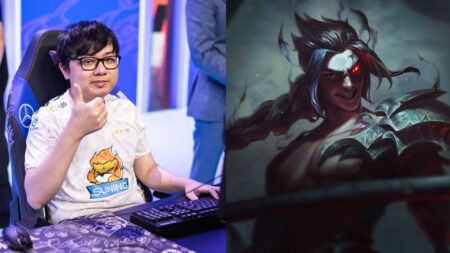 In Suning’s last game of the LPL Spring Split 2021 they went up against eStar.

While Suning had already qualified for playoffs, additional wins would bump up their seeding. Estar on the other hand, were already out of playoffs contention and had nothing to lose.

So even though there were stakes for Suning, Lê “SofM” Quang Duy once again took a big risk in the jungle.

In game one, after eStar first picked Lillia, Suning locked in Alistar support and Kayn jungle. SofM’s Summoner Spells were Teleport and Smite — but the casters did not comment on this just yet because players have the time to swap their spells and runes before going in-game.

Only when the game started did viewers realize that this man really was running Teleport in the jungle. Instead of Flash, SofM is here to work the map.

In the early game, he did not hesitate to use Teleport to get back into farming his jungle. In order to get to Krugs quickly, he teleported to the second inner turret, and kept up in CS with Yang “H4cker” Zhi-Hao’s Lillia.

When Teleport was available again, he saw an opportunity at bot lane. As eStar’s duo pushed up, he turned the 2v1 into a 2v2, lashing at them from behind, taking out their AD carry.

“To be honest, I’ve played a lot of Teleport in solo queue and scrims as well,” said SofM in the post-game interview.

On top of that, SofM chose red Kayn over blue Kayn, and ran a pure lethality build which is uncommon in the current meta. By 30 minutes, he had Prowler’s Claw as his Mythic item, Umbral Glaive, and Edge of Night.

“In solo queue I’ve practiced a lot of red Kayn already, but I still rely largely on blue Kayn’s item build,” said SofM. “I feel it’s super good, so for today’s matchup, I got the opportunity to bring this on stage.”

Suning finished 8th in the Spring split regular season, and will face LNG Esports in Round 1 of the playoffs in a best-of-five series on April 2, 2021 at 5 p.m. GMT+8.