Playoff Perkz has been unleashed. 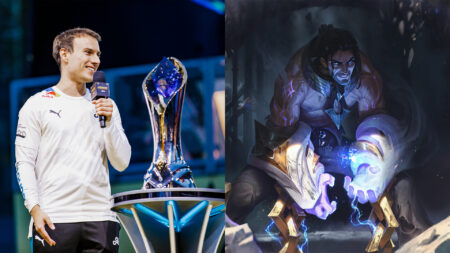 League of Legends superstar Luka “Perkz” Perković has cemented his name in LCS history after just one Spring Split with Cloud9.

In an intense Mid-Season Showdown final against Team Liquid, Perkz capped off C9’s game five draft with Sylas. Seeing as how TL’s team composition featured game-changing ultimates like Hecarim’s Onslaught of Shadows, and Cho’Gath’s Feast, Perkz’s champion was a definite shoo-in with Hijack.

As Fudge and Jesper “Zven” Svenningsen’s Tristana pulled apart TL with Rocket Jump and Decimating Smash, Perkz came in as the one-man clean-up crew, taking an easy double-kill to complete the turnaround ace.

Despite dying in a 1v2 turret dive, Perkz redeemed himself with a perfectly-timed teleport flank. As Fudge tanked in the frontline, Perkz stole Armao’s Onslaught of Shadows to cut off the retreating opponents to secure three team kills and a free Baron.

Cloud9 eventually closed out the series with a dominating clash in the mid lane. With Fudge and Perkz deleting Jo “CoreJJ” Yong-in’s Rell, the rest of Cloud9 claimed another Baron and joined the fight, leaving only Nicolaj “Jensen” Jensen alive as they sieged the base for their first-ever Mid-Season Showdown victory.

As a newly crowned LCS champion, Perkz joins teammate Zven as the only two players to win a title in both the EU and NA regions.

Cloud9 picks up its third LCS championship and will now represent the NA region at the Mid-Season Invitational in May.

READ MORE: Perkz: ‘NA will be behind heading into MSI’