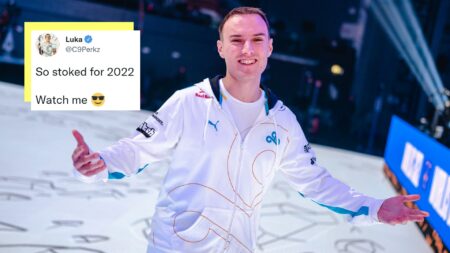 After leaving the League of Legends European Championship (LEC) for a year, superstar mid laner Luka “Perkz” Perković is back in his home region. The Croatian player has parted ways with Cloud9, and will be joining Team Vitality’s LEC roster, the most stacked team of 2022.

All eyes are on Team Vitality right now after they announced their player roster. The team signed former G2 Esports and Cloud9 player Perkz as their mid laner.

“When I was approached to join the team I knew straight away that they had a real passion and hunger to make 2022 their year,” said Perkz in an official statement.

Aside from Perkz, ex-Team Liquid player Barney “Alphari” Morris is also transferring from the League of Legends Championship Series (LCS) back to the LEC.

The bot lane pair played for Berlin International Gaming (BIG) back in 2019 and bagged a few championship titles in the minor leagues.

The super team will be coached by Louis-Victor “Mephisto” Legendre as the head coach and Simão “Simon” Oliveira as the assistant coach.

Fans can watch the debut of this super team at the LEC Spring 2022 regular season which kicks off on January 14.