As metal as it can get. 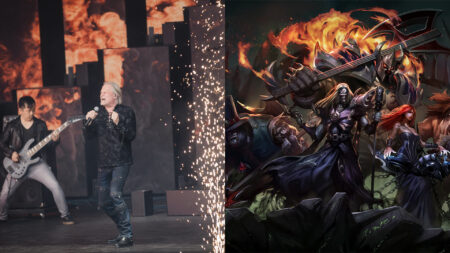 Riot Games has been lauded for its electronic and k-pop musings with the likes of K/DA and True Damage, so it’s not surprising that many League of Legends fans don’t know that the game’s very first musical group is actually a heavy metal band called “Pentakill”.

Pentakill is a six-champion fictional band featuring Sona, Karthus, Kayle, Yorick, Olaf, and Mordekaiser. The hard rock ensemble was last seen in the 2017 music video, Mortal Reminder, where they brought their otherworldly ways to Bandle City.

Seeing how the 2021 LCS Spring Final took place in The Greek Theatre, an iconic amphitheater and concert ground for many music artists, it absolutely made sense for Riot to open the Mid-Season Showdown Final with the head-banging return of Pentakill.

Pentakill’s literally explosive show brought an epic, life-or-death feel to the entire event. As an avid music fan myself, I must commend the band and the producers for Pentakill’s incredible stage presence even without a live audience.

From pyrotechnics to smoky clouds, you are taken to another realm as Jørn Lande’s god-like voice enters on top of an orchestra of distortion.

During the opening show, Pentakill debuted brand new song and an incredible keytar solo that turned the sunny day into a fiery night.

Though this might just be a teaser for more music to come, we’re guessing that Pentakill might see the light of day once again at the 2021 Mid-Season Invitational in Reykjavík, Iceland, which is well-known for its thriving metal scene, spearheaded by world-renowned bands like Sólstafir and Svartidauði.

READ MORE: League of Legends Esports Spring 2021 results and standings as of April 12