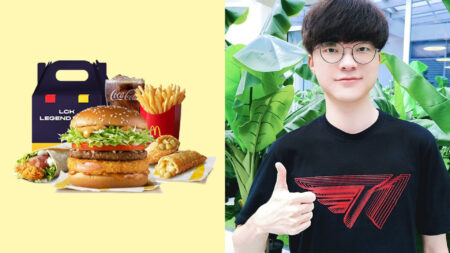 As one of the official sponsors of the LCK, McDonald’s Korea has released a limited-edition food item called the “LCK Legend Pack” for its local fans.

While the burgers are big enough to feed your in-game carry, the LCK Legend Pack has some solid add-ons of a shanghai chicken snack wrap, an apple pie, and the usual soda and french fries combo.

Though it may seem like a run-of-the-mill special order from the Golden Arches, the meal set will randomly come with limited edition role cards that feature the LCK’s best and brightest players in each of the five roles.

If you ever wanted to have Heo “ShowMaker” Su, Jeong “Chovy” Ji-hoon, and Lee “Faker” Sang-hyeok in the palm of your hands at the same time, this is your best chance.

Here are the featured players in their roles:

On top of having these snazzy LCK collectibles, the cards also contain a code on the back that you can enter into the official McDonald’s Korea website for some in-game rewards and skins.

If McDonald’s continues the collaboration with other limited edition LCK items, we’re hoping to see individual player cards that could have a similar collectible factor like Pokémon or baseball cards.