Why Maokai jungle is now his best role in LoL patch 12.17

Where he belongs, naturally. 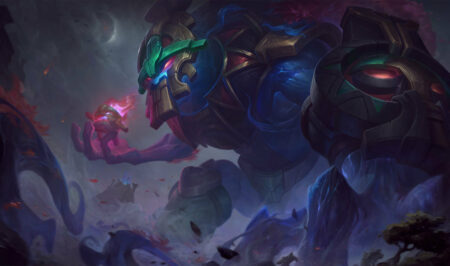 Maokai has been completely absent from major regions in Season 12. In Season 11, he was mostly played as a support, a vastly different role from top where he used to reside.

League of Legends patch 12.17 aims to change all of that by putting the tree back in the forest.

While Riot Games isn’t removing his ability as a support, they are incentivizing players to play him in the jungle. Three of his abilities as well as his passive have been adjusted, including his ultimate, Nature’s Grasp, which now moves faster.

In patch 12.16, he was barely picked in top lane or jungle in solo queue. According to U.GG, at Platinum rank and above, he had a pick rate of 1.4% with a decent 50.56% win rate. With this mini rework, he’ll only get stronger and more popular.

Maokai’s mini rework in League of Legends patch 12.17 solidifies his place in the jungle

Maokai’s passive is the one key adjustment that’s pushing him into the jungle. Sap Magic not only empowers his next basic attack, but also heals him for a percentage of his maximum health. Getting hit by large jungle monsters now reduces his passive’s cooldown per attack. On top of Bramble Smash’s (Q) new bonus damage dealt to monsters, they give him a healthy clear.

His Q’s base damage was also decreased in early levels and increased at later levels to balance out its new scaling attribute — percent maximum health damage, which is extremely useful in the post-patch 12.10 Durability Update environment.

On the flip side, Sapling Toss (E), Maokai’s signature ability, no longer deals percent health damage, and neither do minions take empowered brush damage from them, which means a slower push in lane (and a nerf to ARAM Maokai if you care about that).

However, its mana cost has been reduced by 15 at all levels and slow amount increased to 45%, which will mostly benefit support Maokai.

The most delightful and welcome change is to Nature’s Grasp. Nothing frustrates Maokai players more than seeing opposing champions use their gap-opening abilities to avoid its roots. Its initial missile speed went up by 100%, and its maximum speed increased by 100.

The best part? Maokai himself now gets bonus move speed when Nature’s Grasp hits enemy champions, which allows him to follow up more reliably. Coupled with extra move speed from supports, or meta AD carry Sivir’s ultimate for example, and you can imagine the entire team effectively collapsing on targets.