These teams are now one step closer to virtually lifting the LCS Championship trophy. 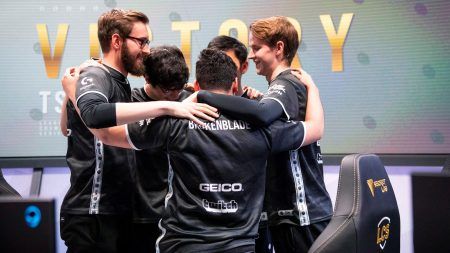 The first week of the LCS Spring Playoffs has concluded with only four teams left in the running. Cloud9 and Evil Geniuses stay up top in the winner’s bracket while FlyQuest and TSM fight for their lives in the loser’s bracket.

Cloud9 experienced smooth sailing in their first match-up against 100 Thieves. The boys in blue easily closed out the series with a sweep, sending their opponents down to the lower bracket.

Despite performing their best in the final game of the series, Cody Sun and Tommy “Ryoma” Lee just could not handle Cloud9’s poke-heavy composition of Zoe, Ezreal, and Yuumi.

Living true to their team name, Evil Geniuses outsmarted FlyQuest in their final game of the series. Daniele “Jiizuke” Di Mauro and Dennis “Svenskeren” Johnsen did the ultimate backdoor with a double global ult into FlyQuest’s base.

Although the two were just two hits shy from destroying the Nexus, Tristan “Zeyzal” Stidam ran past FlyQuest’s last line of defense and claimed the Nexus with a punch combo.

After their victorious sweep against GG, PowerOfEvil credited his mid lane success to his teammates’ abilities to provide resources to his lane.

TSM had an incredible match against 100 Thieves in the lower bracket. The five-game series went the distance, with TSM finally getting the upper hand with a game-changing team clash that only left Cody Sun alive.

Although Cody Sun and his freshly respawned teammates did their best to defend the Nexus, it only took one last hit from Søren “Bjergsen” Bjerg and his Portal Jump to conclude the series with a 3-2 TSM win.

The next LCS Spring Playoffs match will be Cloud9 vs. Evil Geniuses on April 12, Sunday 4 a.m. GMT+8.