An enchanter support that has been out of the meta for many years, her last update was in League of Legends patch 10.11, which nerfed Zephyr’s (W) base damage, and patch 9.11, which adjusted Eye of the Storm (E) such that any ability that slows or knocks up an enemy champion will reduce its cooldown by 20%, up to once per ability cast.

This mechanic rewards players for pulling off her varied Q+W+R combo, which is why reverting it in the latest Janna update has resulted in negative feedback from the community.

Eye of the Storm (E)

According to Riot August, the design team is “draining lane poke power out of her W (Zephyr) +AA’s and focusing it into utility”. The other major change is that Howling Gale is now a much stronger spell when used offensively.

“To clarify, the thing that makes the Q stronger offensively is the minimum range and travel speed,” he added. “Max charge Q’s are much harder to dodge and snapcast knock-ups are easier to hit, especially when combo’d with W.” 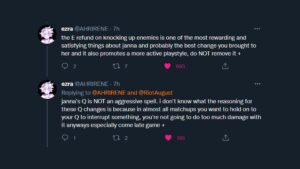 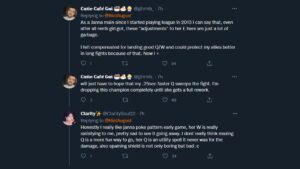 Feedback from the League of Legends community about the Janna update

The main pain point support players and Janna mains identified was the shift of power to Janna’s Howling Gale (Q), which is rarely used as an offensive spell, as she is peeler. Holding onto this ability and using it reactively against engaging enemies at just the right time is what separates a good Janna player from an average one.

What’s more, removing the reduced cooldown on Eye of the Storm introduced in League of Legends patch 9.11 also decreases skill expression, reduces skillcap, as well as risk-reward mechanics in this Janna update.

Janna has been difficult to balance because Riot Games does not want her to revert to a shield-bot with Eye of the Storm. At the same time, Zephyr is a solid ability Janna players use to poke with in lane, and nerfing it together with changes to Q+E might rob her of her identity.

If this Janna update does go through in League of Legends patch 12.1, solo lane Janna might be viable thanks to Howling Gale dealing 80% to minions. She could be useful in the top lane against specific melee matchups, similar to Soraka.

Beware that this Janna update is still tentative, and you can provide feedback directly to Riot August in this Twitter thread.

Updated as of 15 December: Riot August announced on Twitter that these changes will be postponed to patch 11.12.