The winds have changed, again. 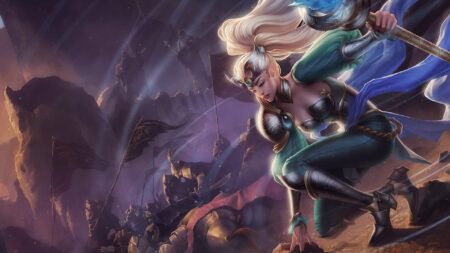 When principal League of Legends champion designer August “August” Browning first teased the new Janna rework slated for patch 12.1, it was met with backlash from the community.

Riot Games’ original plan was to buff Howling Gale’s (Q) damage to make it a stronger offensive spell, and remove the reward mechanic that reduces the cooldown of Eye of the Storm (E) when Janna slows or knocks up an enemy champion.

This was not received favorably by the League of Legends community because pulling off advanced combos with Howling Gale — which isn’t easy to do since it’s one of the hardest charge kill shots to land — and being rewarded for it differentiated good Janna players from masterful ones.

As patch 12.2 is drawing near, Riot August posted an update on Twitter with revised changes that overall, buffs the out-of-meta ranged support.

Mini Janna rework will be on PBE before hitting live servers in League of Legends patch 12.2

Eye of the Storm (E)

After this Janna rework, she would definitely be weaker during the laning phase as her auto attack range has been nerfed, and she will not be able to poke as easily without taking high risks.

While Zephyr’s (W) range, slow duration, movement speed, and base damage has been buffed, it’s balanced out by a longer 12-second flat cooldown.

The good news is that Riot Games plans to bring back a variation of the reward mechanic to Eye of the Storm in this patch 12.2 Janna rework. Instead of reducing its cooldown, players will be rewarded with additional heal and shield power for an extended duration.

And so if you combo and build right, Janna’s shield overall would last longer, especially since her shield decay duration has been buffed.

Janna rework in patch 12.2 makes her scale better from mid to late game

The third key difference from Riot August’s first update is that Moonson is also getting a buff in patch 12.2. An increased tick rate means she’ll be able to heal faster upon cast.

While Howling Gale is still getting a buff, with reduced mana cost, and improved range and travel time, its damage will be kept the same.

“Janna players didn’t seem to care about damage in Q, so we cut the damage buff to add power elsewhere,” explained Riot August.

Overall, this Janna rework means that she will scale better from mid to late game, but still might not be enough to bring her back into the competitive meta.

This Janna update will head to the PBE server for more testing before it’s slated to go live in patch 12.2.