Here’s how the LoL community is reacting to Seraphine

Every star has a story. 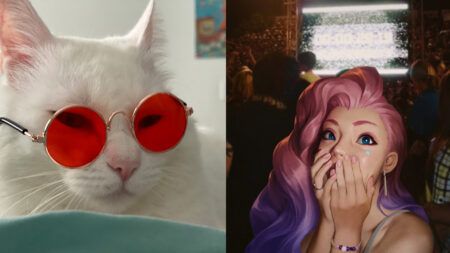 After being teased and hyped up for months on her own social media accounts, League of Legends’ newest champion Seraphine was finally revealed.

Her champion abilities and lore received diverse reactions from the LoL community, ranging from “hard stan” to dislike.

The most obvious is how similar Seraphine’s abilities are to Sona’s. Her Q, High Note, is a ranged damaging ability, like Sona’s, but even better because its damage increases based on the target’s missing health percentage.

Her W, Surround Sound, grants herself and her allies movement speed as well as a shield, which is basically Sona’s W and E combined. When double casted using her passive, she provides an AoE heal to nearby allies.

Beat Drop, Seraphine’s E, deals magic damage to enemies in a line and slows them. This is much better than Sona’s E, which speeds up allies and casts a single target slow off her passive.

What’s more, combined with Stage Presence, enemies that are already slowed are rooted, which is the equivalent of Sona’s ultimate, Crescendo.

Seraphine’s ultimate, Encore, is a linear AoE spell like Sona’s. However, it does more than just crowd controls enemies. Besides charming foes and dealing magic damage, it even buffs allies by granting them maximum Notes from her passive. This increases their basic attack range and deals additional magic damage.

“Why would you pick Sona when Seraphine exists?” said Nick “LS” De Cesare in his first impressions video.

In response to the community’s sentiments on similarities between Seraphine and Sona, Riot Reav3 responded on Reddit that “people should try her out before judging [too] much from [an] ability breakdown video”.

According to him, Seraphine is their second music champion who is much more skillshot intensive and musically inclined because of her passive.

After Sona-Taric and Yuumi-Garen bot lane meta in 2019 where sustain was the name of the game, the community has already envisioned how OP Seraphine and Sona can be together.

CLG’s support Andy “Smoothie” Ta is looking forward to playing her. Can you imagine how both of their Qs will amplify damage? Not to mention the sustain from both of their Ws and layering their ultimates for chain CC!

On Seraphine’s fictional social media, we follow her journey as a shy singer-songwriter who’s joining K/DA for the biggest collaboration of her life. As she prepares for the main stage, she shared her thoughts, insecurities, and vulnerabilities which many fans could relate to.

However, when her voice lines were revealed, the LoL community was puzzled by her sass and sarcastic tone.

Her Runeterra Lore was also not spared from criticism. According to her official biography, her supernatural power comes from hearing the souls of others. At first her parents bought a rare hextech crystal to dampen her powers but later adjusted it to amplify.

Specifically, Riot wrote that “the crystal had a consciousness, born of bracken blood… In a hymn of distant deserts and ancient conflicts of ancestors” and officially listed Skarner as a related champion in her lore.

Seraphine’s lore is darker than expected

Skarner fans, like shoutcaster Clayton “CaptainFlowers” Raines, was stunned by this revelation.

Others were quick to turn it into a meme.

Most of the LoL community is still flabbergasted by how grim her lore was written, a stark contrast to the bright and pure persona of Seraphine.

Did Seraphine meet your expectations?