He even scored a pentakill on Kai’Sa! 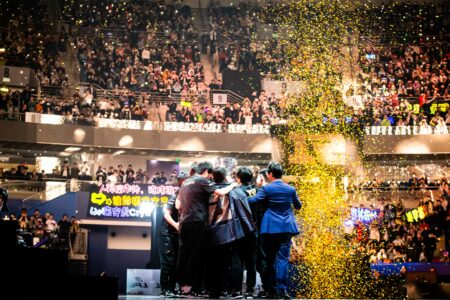 Even though both Royal Never Give Up and FunPlus Phoenix narrowly edged out Edward Gaming 3-2 in the upper and lower bracket semifinals to get here, shoutcasters, analysts, and fans favored the 2019 World Champions in this matchup.

After all, it was FunPlus Phoenix who swept Royal Never Give Up 3-0 in Round 4, which knocked them down to the lower bracket.

Unsurprisingly, game one played out according to the script. An upgrade from their 2019 lineup, former DAMWON Gaming top laner Jang “Nuguri” Ha-gwon styled on Royal Never Give Up on his signature champion, Irelia. Even though both teams were tied in gold, an ace at Baron by FunPlus Phoenix just over the 32-minute mark swung it entirely in their favor.

Undeterred, Royal Never Give Up were quick to adjust their drafts in game two. In a show of confidence, they didn’t bother banning Irelia either. Instead, they empowered mid laner Yuan “Cryin” Cheng-Wei by putting him on Ryze, and managed to secure Chen “GALA” Wei’s signature AD carry, Xayah.

Having to deal with the same match up in game one, Li “Xiaohu” Yuan-Hao on Jayce was forced to absorb a lot of pressure in the top lane. Taking a hit for the team, he was 0/4 by mid game. However, due to rotations from his mid laner, jungler, and support, Royal Never Give Up kept it competitive.

In a long drawn fight at bot 12-minutes in, it was GALA who showed true mastery on Xayah, opening with a two-man root to secure a double kill for his team. The AD carry looked composed even as chaos ensued, ending the sequence with an incredible Featherstorm, Flash, and Bladecaller combo.

Finishing game two with a 6/1/6 KDA in under 30 minutes, GALA helped Royal Never Give Up even up the series.

Since Kai’Sa was not first picked by FunPlus Phoenix on blue side in game three, Royal Never Give Up secured her early in the draft. Just two minutes in, FunPlus Phoenix bot laners Liu “Crisp” Qing-Song’s Rell and Lin “Lwx” Wei-Xiang’s Tristana pulled the trigger, both jumping right on top of GALA’s Kai’Sa.

Despite being lower in HP, GALA narrowly turned it around after Lwx misplaced his Trinket ward outside the tri-bush and stepped out of it. Losing vision of his opposing AD carry costed him one auto attack, giving GALA a double kill.

In the mid game, FunPlus Phoenix was trailing by just over a thousand gold. Taking advantage of Royal Never Give Up’s forced engage, they bit back, and very quickly took down Yan “Wei” Yang-Wei’s Olaf and Cryin’s Orianna. 5v3, this fight was entirely in FunPlus Phoenix’s favor — until GALA showed up big.

Flashing away from Jayce’s To the Skies!, he avoided taking burst damage from Nuguri. Next, GALA pulled a clutch Killer Instinct for the shield, which absorbed just enough damage for him to survive. He also popped his refillable potion early to keep himself alive for this extraordinary pentakill!

Five minutes later, Royal Never Give Up downed the Nexus to put themselves up 2-1 in the best-of-five series. Riding on the huge wave of momentum, GALA went back to Tristana, a champion he lost on in game one.

When Infernal Dragon spawned, both teams were eager to contest it. The difference was that Nuguri had Teleport available but Xiaohu, who was across the map at top, did not, which meant that Royal Never Give Up were stuck in a 4v5.

This quick math however, did not seem to matter. Jumping over the wall, GALA found himself in prime position to finish off Kim “Doinb” Tae-sang’s Ryze. Instantly reacting Flash for Flash, he avoided Lwx’s root, and even saved his Rocket Jump to avoid Xayah’s ultimate.

Not only did Royal Never Give Up win the 4v5, they also scored an ace just 11 minutes into the game.

With every single member of Royal Never Give Up outplaying their opponents micro wise, nothing could stop their sprint to the finish line. By initiating advantageous fights and pressuring the map, Royal Never Give Up didn’t even need Baron to end the short 21-minute game four for the championship win.

“I feel super excited for getting this championship, and I want more in the future,” said GALA in the post-match interview in front of a full-house in Wuhan.

Royal Never Give Up will compete at the Mid-Season Invitational in Iceland starting May 6.