G2 head coach Grabbz: ‘This is on me and management’

The head coach cleared the air after G2’s match against Fnatic. 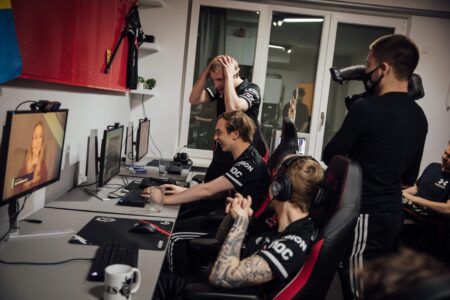 The rivalry between the old and new kings of Europe has finally erupted, and it did not go well for the 2020 Spring and Summer League of Legends European Championship (LEC) champions G2 Esports.

During the 2021 Spring Split Week 3, G2 was pitted against their nemesis, Fnatic. It is the first time former Fnatic star player Martin “Rekkles” Larsson and now G2 bot laner faces off against his former teammates. It’s like that scene from Naruto where the protagonist faces off his best friend, Sasuke, on the rooftop of the village hospital.

Right after the match, G2’s head coach Fabian “GrabbZ” Lohmann posted a series of tweets explaining the reality of things. In his attempt to calm down disappointed fans, GrabbZ took all the blame for G2’s subpar performance, which was mainly caused by “straight up packet loss.” G2 even took a 26-minute technical pause to try and fix their connection.

Right after resuming the game, G2 got a taste of Yasin “Nisqy” Dinçer’s Azir, who pulled off a clutch two-man Emperor’s Divide.

GrabbZ further expressed his sentiments about the much-awaited match of the week, saying that he failed to give his boys a fair fighting chance against Fnatic. A normal and fair game would have been both teams experiencing a reliable internet connection, in which he and the management failed to secure because of decisions made prior to the match.

Of course, Grabbz is not really “diminishing FNC’s victory,” but he was saying the match could have been more enjoyable for everyone if only it were lag-free from their end.

Fnatic finished the game in less than 30 minutes, ten kills ahead of G2, with Bwipo’s Volibear dishing out 31% of the team’s total damage.

In latest episode of G2’s Caps Recaps, the mid laner agreed with GrabbZ’s statement and said that it wasn’t G2’s “peak” performance and even promised that the team will be ready next week.