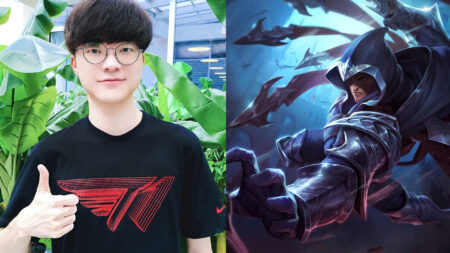 Even though Lee “Faker” Sang-hyeok hasn’t been starting for T1 in the LCK recently, everyone still has a vested interest in what “God” does on the League of Legends high ELO Korean solo queue ladder.

Since March 6, Faker has played 13 games of Talon in the mid lane, so much so that he even named his stream “T1 Faker — Talon”. Holding a 55% win rate and a 2.65 KDA, he has gone up against Katarina, Twisted Fate, LeBlanc, and even a one-trick Zoe — and won.

Adopting a new lethality build that’s rising in popularity, he starts with Tear of the Goddess every game. As it stacks, he’ll first buy Prowler’s Claw as his Mythic item, and Lucidity Boots for the extra Ability Haste.

Once Tear reaches 360 bonus mana, he upgrades it into Manamune. Other mid lane AD assassins like Qiyana are utilizing this new build too. They do not run into mana problems, have low cooldowns, and best of all, are able to bridge the gap with enemy champions.

While we’ve seen Qiyana players use Prowler’s Claw to increase her slipperiness in fights whilst dishing out extra damage, Faker uses it differently.

Unlike Qiyana who possesses Audacity (E) to dash onto a minion to close the distance, Talon doesn’t have an equivalent. Noxian Diplomacy (Q) has a shorter range, while his ultimate, Shadow Assault, grants him bonus movement speed on top of invisibility.

Since it’s not as easy for Talon to jump onto enemy champions, Faker uses Prowler’s Claw onto an enemy minion much like how Qiyana uses Audacity. Against Zoe, he used Prowler’s on an incoming minion, followed by Rake (W), Shadow Assault (R), Noxian Diplomacy (Q), Ignite, and an auto attack to completely burst her down.