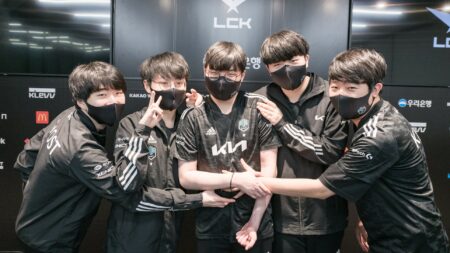 The DK squad were favorites heading into 2021 LCK Summer after outstanding performances at LCK Spring and the 2021 Mid-Season Invitational.

Though the team is holding their ground in the top three, Heo “ShowMaker” Su and the boys took unexpected losses against KT Rolster early in the season. This resulted in experimental role changes, and the brief substitution of AD carry Jang “Ghost” Yong-jun.

With Gen.G’s seven-game win streak on the line, DWG KIA knew that a potential upset would push them closer to the top spot, and steer their season in the right direction.

Despite losing Cho “BeryL” Geon-hee‘s Leona at the start of the final fight, DWG KIA’s Khan was there to turn the tides.

Once he executed Life in the river, Khan’s stolen Braum became the frontline to DWG KIA’s final push. Working off the Curtain Call from Ghost’s Jhin, the DK players eliminated two more opponents and went straight for the Nexus.

Instead of pushing with the team, Khan scouted out the jungle and picked up a solo kill on Ruler, ending game one with a well-deserved ace.

DWG KIA closes out the series with ShowMaker’s LeBlanc

After playing a tanky Sett in game one, ShowMaker showcased his killer instincts on LeBlanc in game two.

By the 13th minute, the DK squad stole Gen.G’s blue buff, and followed through with a solid jungle skirmish.

After DWG KIA picked up three kills in the jungle, Ruler’s Jinx punished them by grabbing a double kill near the inner bot turret.

Still eager to add to the kill score, ShowMaker executed a deep tower dive with two Distortions and a Flash, deleting Jinx from the map.

ShowMaker continued to flex his skills on the deceptive champion in the last clash. Despite becoming the target of Gwak “Bdd” Bo-seong’s Sett, the mid laner popped the Stasis from Zhonya’s Hourglass to stall for time.

ShowMaker then finessed his way out of the sticky situation with a Distortion over the jungle wall. Anticipating Kim “Clid” Tae-min’s Diana to also traverse the wall, he instantly returned to the line bush for a great escape.

With only two left to defend, DWG KIA stormed the base for the ace and the series win.