Every player and corresponding character explained. 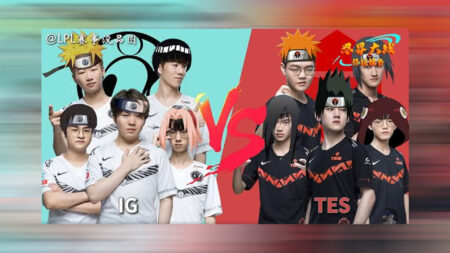 Rivalries will run high this weekend in China’s League of Legends Pro League (LPL) as two of the most popular teams — Invictus Gaming and Top Esports — gear up for their regular season best-of-three series for Spring Split 2021.

Tension started last year when bot laner Yu “JackeyLove” Wen-Bo left Invictus Gaming after the 2019 season. He took a while to find a new team, and eventually joined Top Esports in the middle of Spring 2020, elevating them from A to S+ tier, taking them all the way to the Worlds 2020 semifinals.

His move sparked not only a new rivalry, but also many fan-made memes. The most famous one compares each team and player with a Naruto character. Here’s the full explanation and rundown, with new 2021 players included:

Konoha Village is the hometown of protagonist, Naruto, and therefore an apt representation of Invictus Gaming, one of the original organizations in the LPL.

TheShy as Rock Lee: Rock Lee possesses high technical abilities — and is willing to risk his own life to win a fight, as demonstrated in his Chunin exam against Gaara. Considering that TheShy accumulated the highest number of deaths in LPL Spring 2020, and is also known for his mechanics on carry champions in the top lane, it’s easy to see how much his playstyle reflects Rock.

Ning as Naruto: Part of IG since mid-2017, jungler Gao “Ning” Zhen-Ning is on a break from professional play this split, and is spending his days streaming under the team’s banner instead. Like Naruto, they’re both on hiatus doing other jobs, but still remains at the heart of the clan.

XUN as Boruto: The son of Naruto, Boruto is a direct descendent of their family clan. This is Peng “XUN” Li-Xun’s debut in the LPL after half a year growing up in and winning the LDL Summer championship on their academy team, IG Young. Already proving that he has the skills and mechanics to be on IG, XUN is seen shotcalling with high energy during IG’s games, and continues to mature on their starting roster.

Rookie as Hatake Kakashi: A genius ninja who has the knowledge and ability to fight anyone, Hatake Kakashi is basically Song “Rookie” Eui-jin. The most consistent IG player, he knows exactly how to trade and control his mid lane domain, and has stepped up multiple times to carry his team to victory.

Puff as Sai: Sai Yamanaka is a supporting character in Naruto. With carry oriented teammates like TheShy and Rookie, Ding “Puff” Wang played a supporting role on the team for the majority of 2020. In 2021, former Royal Never Give Up and eStar bot laner Zhang “Wink” Rui joined, and has been the starting AD carry. However, after Puff’s incredible first match against league leaders Edward Gaming, he’s been receiving more stage time.

Wink as Shikamaru: Like Shikamaru Nara, Zhang “Wink” Rui is an intelligent player who does his best to facilitate his team’s goals in-game. Integrating smoothly with his new squad this split, he’s been putting on a solid performance every game.

Baolan as Sakura Haruno: After competing in six series this Spring, Wang “Baolan” Liu-Yi has taken a backseat. Like Sakura Haruno, he’s now a side character, but as we all know, he is still really strong and could return to the starting roster anytime.

Lucas as Shino: Li “Lucas” Tan-Pan-Ao and Shino Aburame are both quiet, calm, cool, and collected. Together with XUN, he won the LDL Summer title, and has shown much potential.

Top Esports as the Akatsuki Clan

The Akatsuki Clan is a group of stray ninjas with different ideals — a reflection of the current Top Esports squad that brought together talented individuals to rise to the top.

369 as Pain: Each time Bai “369” Jia-Hao takes the stage, no one knows if he’ll roll a three, six, or nine. Not even himself. He’s exactly like Pain, a super strong ninja who is capable of eliminating half the competition, just not all the time.

Karsa as Uchiha Obito: Obito left Konoha Village to join a stronger faction based on his ideals. Previously from Flash Wolves and Royal Never Give Up, Hung “Karsa” Hao-Hsuan chose greener pastures at the start of 2020 with TES.

knight as Orochimaru: Zhuo “knight” Ding possesses what fans dub as “the left hand of God”. A naturally talented player with sharp mechanics, knight is here to cement his name among the legendary mid laners. There is a strong association here with Orochimaru’s ultimate quest for knowledge and power in the Naruto series.

Jackeylove as Uchiha Sasuke: Sasuke betrayed Konoha Village, turned his back on it forever, and ultimately desires to destroy it. Sound familiar?

Zhuo as Juugo: Since acquiring former Team WE academy support Wang “Zhuo” Xu-Zhuo for the 2021 season, Zhuo has been the sole starting support. Drawing a parallel, Jugo was from a lesser known, unnamed clan, but clearly has strong abilities that make him a formidable foe.

Yuyanjia as Kabuto: An espionage ninja who is always two steps ahead of his opponents, Yakushi Kabuto is a great at intelligence gathering. This is the job of a support, and reflects the playstyle of Liang “yuyanjia” Jia-Yuan, who is still waiting for the right time to strike as he has yet to play a game this Spring.

Invictus Gaming and Top Esports will face off in their LPL Spring 2021 regular season match this Sunday, March 7 at 7 p.m. Catch it live on LPL’s official YouTube or Twitch channel.