Despite losing Chovy and Deft, Pyosik has DRX playing like contenders

The lone veteran leads his pack to victory again. 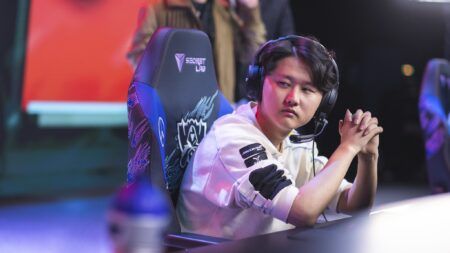 The League of Legends Champions Korea is recognized as one of the best leagues in the world. While some teams like T1 and DWG KIA are poised to dominate with superstar mid laners, DRX’s veteran jungler, Hong “Pyosik” Chang-hyeon, is currently flying high with a bright-eyed band of youngsters.

Despite being a young-star powerhouse in 2020, the DRX failed to advance further at Worlds 2020 after getting swept by DWG KIA (formerly known as DAMWON Gaming).

Another hard hit to DRX was the sudden suspension of Kim “cvMax” Dae-ho’s coaching due to Riot Games’ ruling on his previous allegations of player abuse. cvMax was able to bring out world-class gameplay from Korean rookies, and is credited for the rising success of Griffin in 2019 and DRX in 2020.

Heading into 2021, the org did its best to instill some life into the DRX roster. Former CLG head coach Kim “SSONG” Sang-soo stepped in as the interim head coach, while five young talents filled up the roster alongside Pyosik. With Pyosik being the only senior on the team, he immediately stood out as the leader of the newfound squad.

Even though the team had a lackluster performance at the 2020 KeSPA Cup, 2021 LCK Spring told another story. The team was finally clicking and clutching some solid victories against mid-table teams like Afreeca Freecs and Nongshim RedForce. Pyosik was also one of the pioneers of Udyr’s return, a champion last seen five years ago in the LCK.

In Week 4, the rising DRX squad finally broke through one of LCK’s strongest superteams, Gen.G. After Gen.G subbed in rookie Kim “Karis’ Hong-jo for Gwak “Bbd” Bo-seong, Pyosik decided to pull out his match-winning Udyr.

Pyosik’s Udyr succeeded in bringing a game one victory to the young DRX squad. Gen.G might have had better laning phases due to their more clean-cut gameplay, but Pyosik disrupted team fights by hunting down players alongside Kingen’s Volibear.

By game three, Pyosik and his crew were keeping up DRX’s reputation as an aggressive team. Using lane pressure and priority, Pyosik on Olaf worked with his support to zone Gen.G out of their own jungle, and positioned aggressively.

Overall, Pyosik shines as an aggressive playmaker for his team. As the more experienced player on the squad, he provides a killer instinct balanced with objective control.

In terms of teamplay, DRX’s setup is pretty simple. Pyosik, Kingen, and Becca provide an impenetrable frontline for BAO and SOLKA to claim kills from the backline. Even when the new players make mistakes, Pyosik is always there to gain back the advantage through quick ganks and map domination.

No one really expected much from DRX’s roster rebuild, but Pyosik proves that he’s got the heart and leadership to take DRX to the next level.