A standout performance by the Spring leaders. 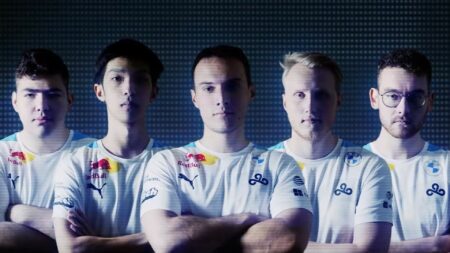 LCS Spring leaders Cloud9 continue their top form into the Mid-Season Showdown, an updated version of the traditional Spring Playoffs.

In the upper bracket, Cloud9 faced fourth seed 100 Thieves in a best-of-five series. 100T was ready to dominate with returning mid laner Tommy “ry0ma” Le, but Cloud9 easily thwarted their efforts with a 3-0 sweep.

In game one, the two teams went back and forth in skirmishes. 100 Thieves was looking poised to take over with Soul point, but Cloud9 pulled off a game-changing reengage.

With Luka “Perkz” Perković’s Yone joining the rest of his squad in the jungle, C9 chased down the final 100T members for the ace and claimed game one of the series.

Game two was an even stronger showing by Cloud9. Even though Closer managed to steal the Baron, the squad was unfazed and immediately punished the Udyr player.

Looking to retaliate with some more kills, C9 continued the fight into the mid lane. Fudge’s Sion rushed in with Unstoppable Onslaught and Vulcan’s Tahm Kench teleported into the fray with Blaber’s Olaf.

Although ry0ma’s Azir utilized Emperor’s Divide to create some space from the attacking members, Perkz flanked the retreating opponents and delivered a perfectly-timed Shockwave for the double kill.

To close out the series, Fudge stole the show with an incredible Sett outplay.

As ry0ma was trying to defend the mid inhibitor turret, the C9 top laner dove under the turret, pulled him in with Facebreaker, and dunked the Syndra player into the range of his teammates. With ry0ma still trying to limp away, Fudge followed up with a Haymaker to take the mid laner’s life.

Now utilizing the 4v5 situation, Cloud9 pushed the 100T squad back into their fountain and destroyed the Nexus for the well-deserved sweep.

Cloud9 advances in the upper bracket of MSS and will face Team Liquid on April 4, 4 a.m. (GMT+8).