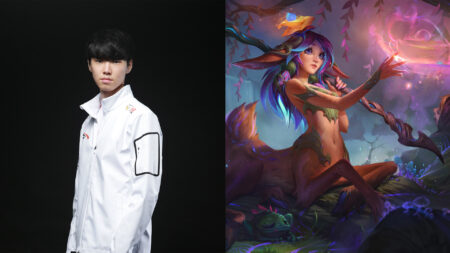 Jeong “Chovy” Ji-hoon is considered to be one of the best mid laners in the LCK, if not the world, rivaling the likes of Heo “ShowMaker” Su and even the legendary Lee “Faker” Sang-hyeok.

While he’s known for his impressive skills on Zoe, Galio, and other meta mid lane champions, Chovy chose to experiment during Hanwha Life Esports’ match against Nongshim RedForce in Week 7 of the LCK.

With Chovy coming off of a solid 3/2/10 Azir performance in the first game, HLE mixed up the draft by locking Lillia in as their supposed jungler for game two, only to have Kim “yoHan” Yo-han’s Olaf last picked on red side, which shifted Lillia to the mid lane.

Chovy’s Lillia struggled to get past Han “Peanut” Wang-ho’s countering Hecarim. Whenever Chovy was overextended, Peanut and Park “Bay” Jun-byeong’s Azir punished him with Onslaught of Shadows and sand soldier damage.

However, things started to turn around for HLE when Chovy acted as the initiator in team fights, successfully pulling off Lillia’s ultimate, Lilting Lullaby.

In a river skirmish, Chovy created an opening by marking Peanut and Lee “Rich” Jae-won’s Gragas with Blooming Blows, and put them to sleep. With the frontline now offline for Nongshim, the rest of HLE brought down the damage for four kills and an Infernal Drake.

Chovy continued his sandman-like performance in the final fight, but this time, he utilized Swirlseed to apply Dream Dust from a safe distance.

The Lillia player hit both Peanut and Kim “Kellin” Hyeong-gyu’s Rell, and casted Lilting Lullaby, but only Rell fell asleep as Peanut mitigated the disable with the immunity from Onslaught of Shadows.

Even though he was spared, Peanut’s dash into the fray left his backline exposed. Kim “Deft” Hyuk-kyu’s Kai’Sa and YoHan’s Olaf took the opportunity to charge into Seo “deokdam” Dae-gil’s Aphelios.

Park “Morgan” Gi-tae’s Sion assisted yoHan in eliminating deokdam and Kellin, while Chovy and Deft double-teamed Bay after his Stasis. As the remaining HLE players closed in on Nongshim, Deft claimed a double kill and the ace for a 2-0 sweep.

Chovy’s Lillia finished the game with a 3/3/6 KDA. Even though Morgan was chosen as the player of the game for his deadly Sion, Chovy now has a new surprise pick that will keep opponents guessing during the drafting phase.