Can Schalke ’04 support Limit actually see into the future?

Call him the Dr. Strange of the LEC. 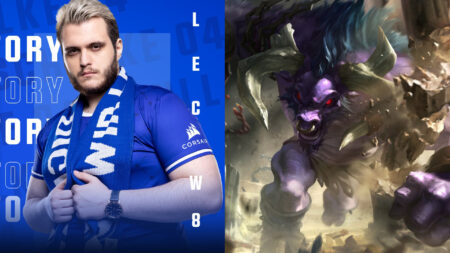 The playoffs is set for the League of Legends European Championship (LEC) Spring Split 2021 after eight weeks of competition.

After laning phase ended, Limit and his bot laner Matúš “Neon” Jakubčík’s Xayah rotated to top to mirror Vitality. Once he pushed the top lane wave, Crownshot retreated into his own jungle’s tri-bush which was Control Warded, where he thought was safe.

However, Limit’s deep ward placement and positioning on the map made all the difference in this situation. He gave Schalke 04 the information they needed to turn the fight against Crownshot.

Upon seeing Crownshot, Limit flashed over the wall as his bot laner while his AD carry Xayah, sandwiched Tristana.

Just as Limit expected, Crownshot’s Tristana performed a Rocket Jump over the wall, which the former quickly countered by executing a classic Headbutt-Trample Alistar combo to knockback and stun Crownshot. He literally handed the enemy to Neon on a silver platter!

This outstanding play by Limit just shows how this up-and-coming support player is on top of his game when it comes to setting up enemies and giving Schalke 04 the important kills that they need. Limit has a whopping 73.2% kill participation this season, the highest among any of his teammates, and fourth among LEC support players.

Can Limit carry his team to victory and accomplish another miracle for Schalke 04 at the LEC Spring Playoffs 2021?