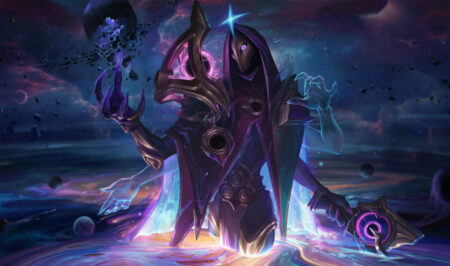 League of Legends has thousands of skins. How can anyone pick the best ones?

Well, we’ve stepped up to the monumental task to find the most aesthetically-pleasing, head-turning, jaw-dropping skins in the game.

Here are the five best League of Legends skins to date

The Redeemer and Lucian’s wife, Senna, has been getting awesome skin concepts since her debut last year. She even became a part of the 2019 World Championship (Worlds) virtual group True Damage, where she received a prestige edition skin with pieces designed by Louis Vuitton Artistic Director of Women’s Collections Nicolas Ghesquière.

Senna comes in royal colors black, white, and gold with a hint of vivid blue on her top. Her Relic Cannon has been transformed into a gigantic, modern gun with the Louis Vuitton logo in the middle of the handle.

The skin plays with geometric shapes and sparkles while showing off the classic LV floral motifs throughout Senna’s abilities.

Summoners who own this skin might feel a bit luxurious with its particle effects, as True Damage Senna Prestige Edition comes in a lot of shimmers and jewel textures in pink, gold, and a subtle blue.

The Purifier, Lucian, rules the Wild West with this badass-looking High Noon skin. While gunslinger motifs aren’t unique, we haven’t seen one as well done as this one. High Noon Lucian is a half-human, half-devil being out to seek revenge for his wife Senna. His light pistols have been transformed into a golden gun on his left hand and a demonic gun on his right hand.

The particle effects for his abilities show a fiery orange which later on fades to a smokey black when cast. Using his ultimate ability, The Culling, mutates Lucian into a full relentless demon.

The demon also appears in Lucian’s recall animation, jumping through ehat we could assume as a blazing tunnel to get back to the Nexus Obelisk.

Upon dying, the earth automatically opens up and swallows High Noon Lucian, creating an instant grave for the gunslinger.

High Noon Lucian is a legendary skin which costs 1820 RP.

Vayne easily outshines all the other 22 members of the PROJECT faction. In this skin, the Night Hunter’s default crimson Nightseeker Goggles have been replaced with an advanced-looking headpiece to keep up with the futuristic and dystopian concept of the skin line.

She sports a sleek-looking suit in black and gray, paired with her iconic cape which is now in purple. Vayne’s weapons the Wristbow Launcher and Heavy Crossbow are now in silver colors with a purple glow, modified for a cleaner look.

With this skin, Vayne casts a purple holographic marker to her target and it even includes a pop-up with small, unreadable text similar to advanced data analysis usually portrayed in futuristic pop-culture scenes.

Using Vayne’s ultimate ability, Final Hour gives players the perspective of being in her shoes by putting out a holographic HUD overlay on the screen. It’s like becoming PROJECT: Vayne herself!

To give off the ultimate huntress vibes, PROJECT: Vayne has her very own motorcycle which she summons in her recall animation. She can also ride it around while her homeguard effect is active.

PROJECT: Vayne is a legendary skin that costs 1820 RP.

The Virtuoso, Jhin, very much fits this Lovecraftian skin line-up with the cosmic horror he brings to making killing an art form. He looks terrifying and magnificent at the same time in his splash art, basking in the pools of the universe and toying with asteroids of the vast space.

This celestial entity seems to just love playing with things in space — that includes stars, black holes, and even Astronaut Teemo.

We’re also absolutely in love with the star trails that he leaves whenever his Dancing Grenade abilities bounces among enemies.

Curtain Call is presented in slightly different styles. This is how it looks like for the user:

While allies and enemies view it with a little less flair.

Dark Cosmic Jhin’s death doesn’t really seem too painful, as it only shows the marksman slowly disappearing into particles until only a constellation of him is left.

Dark Cosmic Jhin is a legendary skin that costs 1820 RP.

Lux’s ultimate skin takes the top spot on our list as the best League of Legends skin. As someone who can wield magic, it is only fitting that her ultimate form is a master elementalist who can wield and use the different elements to her own advantage.

Lux starts with her base form, Light. As the game progresses, she gains elemental power to master an element and add to her current form. Elementalist Lux has ten distinct elemental forms, combining the four basic elements fire, water, earth, and air to create new transformations.

Each of her form offers different visual effects while retaining some details of her base form. Which Lux are you today?

Elementalist Lux comes with five summoner icons which, when equipped, changes the background of the Summoner’s profile.

To commemorate her ultimate skin, League of Legends has even produced a short cinematic showcasing her different forms.

For 3250 RP, Summoners can own Elementalist Lux. It’s like having ten skins in one!