The emperor has returned. 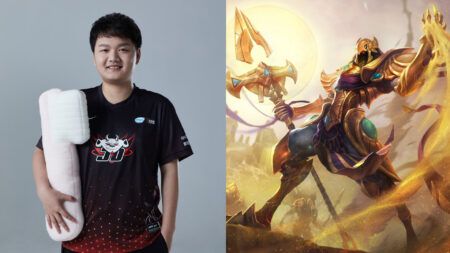 During last year’s World Championship, the two LPL teams had to face each other in the first round of knockouts. JD Gaming, who won LPL Spring 2020, and met Top Esports again in the Summer final, were favorites going into the matchup as fans were keen to see yet another JDG and TES clash in the semifinals.

Dark horse Suning however, destroyed those plans. They eliminated JDG 3-1 from the competition, and went on to defeat Top Esports 3-1 in the semifinals to become LPL’s sole representative in the Worlds 2020 final against LCK’s top seed, DAMWON Gaming, where they fell short 1-3.

Yesterday was the first time JD Gaming and Suning took on each other since Worlds, with two key differences: Suning is without their world-class support and shotcaller Hu “SwordArt” Shuo-Chieh, who moved to TSM. They are also without their head coach Shih “Chashao” Yi-Hao, who now stands on the side of JDG, replacing Yoon “Homme” Sung-young. Sitting in 12th place out of 17 teams with a 3-4 record, the lions have been struggling.

Up against the team he had developed for one and a half years, Chashao knew Suning inside out. At the same time, he’s also showing improvement in pushing JDG up a notch, who were 4-3 before this match, peaking fifth in the current standings,

In game one, he banned three AD carries — Samira, Kai’Sa, and Tristana — and denied Jhin from Tang “huanfeng” Huan-Feng, forcing him to pick a safe B-tier bot laner, Ezreal.

In response to Angel’s well-known first-pick worthy Twisted Fate and a targeted Zoe ban from Suning , Chashao empowered Zeng “Yagao” Qi, whose IGN means toothpaste, with his signature champion, Azir, even though many pro teams prefer Galio and Ryze to match TF’s roam.

Perhaps it’s because it’s still officially Lunar New Year holidays until February 26, or perhaps it’s due to the fact that both teams haven’t competed on stage for two weeks, but game one was littered with individual blunders, derps, and baits from both sides.

Messily answering blow for blow, 35 minutes into the game, JDG and Suning were dead even in kills (6-6), dragons (three each), and gold at over 58,000, with JDG having a slight 600 advantage. Not to mention, team composition wise, Suning had huanfeng’s Ezreal for late game, while JDG depended on Yagao’s Azir.

Even though Baron spawned at 20 minutes, neither team were able to secure it until this last fight at 35:00 around the pit.

Chen “Bin” Ze-Bin’s Gragas opened the tussle by isolating Zuo “LvMao” Ming-Hao’s Alistar with his Explosive Cask ultimate. A beefy cow, he did not perish immediately, which bought time for JDG to turn on Angel’s flanking Twisted Fate for a one-for-one trade.

Using the space they created, Yagao and Lee “LokeN” Dong-wook rode on the frontline of Zhang “Zoom” Xing-Ran’s Rekenton and Seo “Kanavi” Jin-hyeok’s Udyr, who sprinted around in Bear Stance stunning target after target in succession.

Taking advantage of a scattered Suning, LokeN’s Jhin opened his ultimate as Yagao’s Azir cleaned house for a quadra kill, that led to a Baron buff, Cloud Soul, and a game one victory.

In yet another back and forth game, the gold was practically even 29 minutes in, at 52,800 and 52,900. Securing three dragons to Suning’s one, JDG was at Soul Point. Despite losing out on Infernal Soul, they found two picks which opened up Baron, allowing them to pull ahead in tempo and gold.

Ten seconds before the sixth dragon spawn, JDG spotted Bin and Angel at bot lane without a minion wave. Recognizing their positional leverage, all five JDG members collapsed on them. Despite whiffing Emperor’s Divide, Yagao flashed over the wall after the crowd control from Luo “ON” Wen-Jun’s Thresh went on cooldown.

Standing in the safest, best possible position, Yagao’s Azir was free to command his soldiers for a triple kill. With four members down on the side of Suning, JDG marched into their base for the 2-0 sweep.

For his game-deciding antics on Azir with a high 88.2% kill participation, Yagao was awarded the MVP a second time in the same evening.