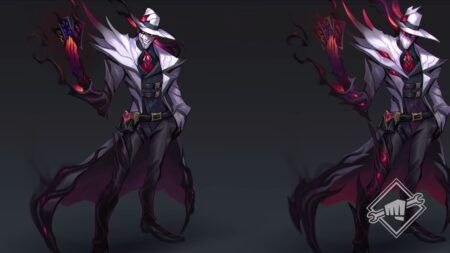 It’s official! The Crime City Nightmare skin line will be making its debut this year.

After holding a global poll last month, Crime City Nightmare won by a landslide against two other concepts, the Debonair 2.0 and Monster Tamers.

Crime City Nightmare is all about the leader of the streets — we’re talking about gang fights, sinister bosses, and even sinister transactions in abandoned alleyways.

“In Crime City Nightmare, we focus on the crime-scape that is Valoran City, where a street war takes a dark and horrifying turn, as a mysterious figure introduces those desperate for power to an ancient, Cthulhu-inspired evil,” according to Riot Games Product Lead for Personalization and Events for the League Dev Team Jonathan “Bellissimo” Bellis.

With this concept dominating the polls, here are the five LoL champions we think would best fit the skin line.

League of Legends’ newest champion and Ulquiorra-look alike Viego stands on top of our list with his cold gaze and intimidating form. Viego could easily pass up as a syndicate, wearing a black, open-chest tuxedo to emphasize the wicked tattoos on his chest as a Crime City Nightmare member. He’s still carrying his spectral blade which now blazes a fiery, deep scarlet color.

Nidalee’s past skins have always been about bringing out a playful casual vibe or sporting a really cool-looking armor. We want Nidalee to be a part of the Crime City Nightmare skin as THE mafia boss, complete with an off-shoulder dress and a flowy, furry coat that touches the floor as she roams the streets. Of course, Nidalee would have her lips painted in a classic red color with a noticeably large diamond choker hugging her supple neck.

This psychopath just seems to be Riot’s favorite champion when it comes to skins, practically because Jhin fits into so many good concepts! He would make a gorgeous hitman in the Crime City Nightmare thematic since he treats his merciless killings as a form of art. All he needs is a white suit, a pair of suspenders, tobacco in his left hand, and his trusty gun on his right.

Kayn shall be the right-hand man of the bosses in this gang of crimelords, ready to reap the heads of anyone who dares to betray the clan. To fit into the theme, Crime City Nightmare Kayn retains his topless form, wearing nothing but a pair of black suspenders attached to his black slacks. Instead of braids, Kayn will wear his hair loose and neatly combed for a fresh and formal image.

Camille would look absolutely fantastic in a long evening gown with a sexy high slit to highlight her hextech augmented legs. To pull off this regal piece of clothing, Camille would have to wear a black and white Kentucky derby hat and a pair of silky gloves for that Jessica Rabbit-inspired look.