Hearthstone enters the Year of the Dragon

There will be improvements for the single-player experience, with more Dungeon Run–style missions coming. 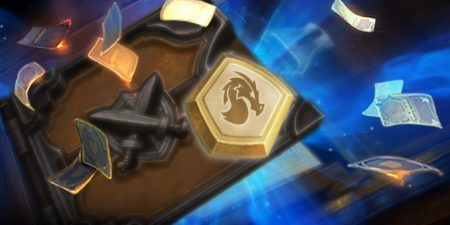 The Year of the Raven is now over, for the Year of the Dragon is upon us. The new content update for Hearthstone sends nine cards to the Hall of Fame, improves the Single-player and Arena experience, and more.

The Year of the Dragon will be sending Naturalize, Doomguard, Divine Favor, as well as the powerful Baku the Mooneater and Genn Greymane cards, to the Hall of Fame.

They will be joined by Gloom Stag, Black Cat, Glitter Moth, and Murkspark Eel, since those cards were complementary to the Even-Odd mechanic that Baku and Genn introduced.

Hearthstone developer Blizzard Entertainment will be taking a different approach to the Single-player experience for Year of the Dragon. Due to positive feedback on previous Dungeon Run–style missions, Blizzard will be using those as a framework for what’s coming this year, but with a more robust level of customization.

The first Solo Adventure for the Year of the Dragon launches about a month after the first expansion of the year, kicking off with a free chapter from the perspective of a mysterious (yet familiar) new Mage character.

Additional chapters can either be acquired for 700 gold each, or purchased in its entirety for US$19.99. Additional chapters will come with two characters, each with three Hero Powers and four starting decks to unlock that are usable against dozens of new bosses across multiple game modes. After completing each chapter, players will earn three card packs from the new expansion — with an additional card given back along with a Golden Classic pack for completing all five missions.

Blizzard has will also be updating the Arena draft pool by rotating out sets and adding new ones twice every expansion. The Arena draft pool will contain the following sets for the first rotation: Basic, Classic, Curse of Naxxramas, Whispers of the Old Gods, Mean Streets of Gadgetzan, The Witchwood, and the first expansion of this year.

Other additions for Year of the Dragon include rerolls for Legendary quests, random card back options, a smarter deck builder, and easier ways to get a Golden Hero.

Finally, players will be rewarded with one pack each from the Journey to Un’Goro, Knights of the Frozen Throne, and Kobolds & Catacombs expansions by logging in between midnight on March 25 and midnight of April 2 as a farewell to the sets rotating out of Standard.

Fittingly called the ‘Mammoth Sunset,’ this farewell period will also let players get at it in a new Tavern Brawl: Brawl Block called Year of the Mammoth. This constructed Brawl will only allow cards from Journey to Un’Goro, Knights of the Frozen Throne, and Kobolds & Catacombs, and will award players with the usual Classic pack with their first win.

Stay tuned for more content from us on Hearthstone’s Year of the Dragon.