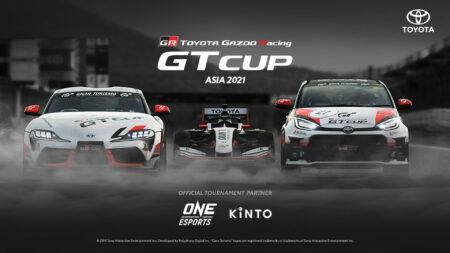 ONE Esports and Toyota Motor Asia Pacific are ready to deliver the next big esports racing experience, once again bringing together Asia’s top Gran Turismo Sport racers to compete in an exciting tournament series.

The competition showcases both parties’ commitment to making it possible for thousands of motorsports enthusiasts to experience the thrill of racing Toyota GR cars on iconic racing circuits.

TGR GT Cup Asia 2021 is an online competition that features the fastest, most skilled e-Motorsport racers across Asia as they pit their driving skills against each other.

Local qualifiers are currently underway, and once complete, the top three qualifiers from each local team will compete against each other at the TGR GT Cup Asia 2021 where the top two winners will get to compete in the highly-anticipated TGR GT Cup 2021.

The competing countries are:

Each race will feature a different track and exciting Toyota road cars and dedicated racing cars to go along with it.

For the first time, each car will also sport a unique livery designed by fans! Fans took part in a competition to design the livery for their local team race car with one winning suggestion selected for Thailand, Malaysia, India, Singapore, Indonesia, Taiwan, and South Korea.

Semifinals (Group A & B)

The top three qualifiers from each local team will compete in two groups, racing in the newly introduced GR Yaris on the Tokyo Expressway racing circuit.

The remaining 6 racers from Group A and 5 racers from Group B in the Semi-Finals Race will compete on the renowned Fuji Speedway circuit in the GR Supra 20, in their last attempt to qualify for the Final Race.

This first round will take place on the Spa-Francorchamps circuit in Belgium. The 15 racers will put their skills to the test in the recently premiered GR 86, specially tuned for sports racing.

The second round will be on the iconic Le Mans circuit in France, with racers racing in the electric powertrain Toyota TS 050 Hybrid that has undergone massive improvements to deliver maximum power.

The top three racers will walk away with these prizes based on their cumulative points earned at each race.

Prizes are awarded based on the total points earned by the three individuals representing their local team, and will be shared equally amongst them.