The new business will operate out of Philadelphia, Los Angeles and Seoul. 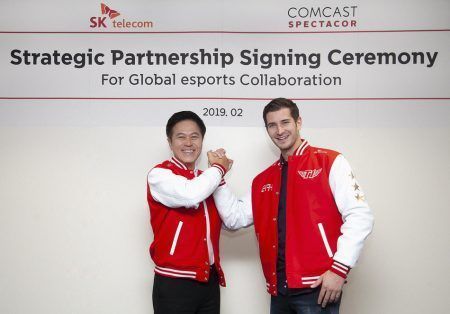 Comcast Spectacor and the South Korean esports organization SK Telecom has announced the formation of a joint esports venture at the Mobile World Congress held in Barcelona, Spain.

The joint venture will be known as T1 Entertainment & Sports, an adoption of the branding of the South Korean telecom giant’s League of Legends team, the three-time World Champion SK Telecom T1. SK Telecom T1 is one of the most recognizable esports brands in the world, largely thanks to the popularity of its star player, Lee “Faker” Sang-hyeok.

“We at SK Telecom feel that esports is becoming increasingly more popular, especially among the young generation. We have thus founded T1 in 2004 and made the number one team in Korea. Together with Comcast Spectacor, we hope to become the global number one team,” said CEO and President of SK Telecom Park Jung-ho.

“This agreement marks a significant step for Comcast Spectacor’s esports business as we expand globally and join forces with the most successful League of Legends team in history,” said president of the Spectacor Gaming division at Comcast Spectacor, Tucker Roberts.

T1 Entertainment & Sports will be operated out of Philadelphia and Los Angeles in the US, as well as from Seoul in South Korea.

Comcast Spectacor is a Philadelphia-based subsidiary of the Comcast Corporation, and it owns the Overwatch League (OWL) team Philadelphia Fusion, which reached the inaugural OWL grand finals last July.

Despite the merger, the Fusion will retain their branding and operate outside the T1 umbrella.

In addition to the existing presence of SK Telecom 1 in esports titles such as Overwatch, League of Legends, PlayerUnknown’s Battlegrounds and Hearthstone, T1 also plans to acquire players for Fortnite: Battle Royale, Apex Legends, and Super Smash Bros. Ultimate.

“We’re excited to form a premier esports organization with SK Telecom and grow our businesses in new directions,” added Roberts.