It was definitely a cool move, Ed.

Do you ever wonder how the most recognizable fighting game moves came to be?

His anecdote was posted in celebration of his team’s upcoming 30 year anniversary for the fighting game franchise’s first installment. 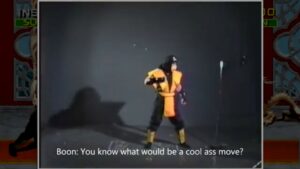 During the film shoot for the iconic character of Scorpion, a section of the film showcased Ed Boon conceptualizing the signature spear move of the ninja character.

The anatomy of the classic Mortal Kombat move

Boon and his crew were quick on their feet to bring the spear move to life. They considered adding ropes and attempted to figure out what the go-to voice line would be, and fleshed out the Scorpion classic on the fly.

Rather than just being a normal projectile, Boon mentioned that the move would get “stuck” into the opponent and drag them across the screen.

While the actor tried doing more lengthy iterations of the spear move, Boon said that the move should have a “5 frame” wind-up to surprise opponents.

In a chain of tweets, Boon broke down how the clip showed the initial characteristics of the powerful move.

“One of those details was how fast Scorpion threw the spear. This meant keeping the animation simple with very few frames,” said Boon. “We also wanted the spear to pass over a ducking opponent, so we kept it at chest height.”