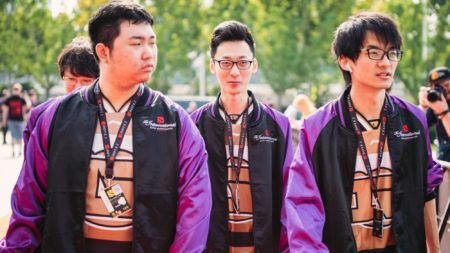 Royal Never Give Up has defeated Newbee 3-1 in the Grand Final of the ESL One Los Angeles Online China tournament.

During the first two games of the Grand Final, Gao “Setsu” Zhenxiong put together two stellar performances as RNG’s middle laner, first on Storm Spirit, and then on Puck.

After losing the third game to Newbee’s surprise Alchemist pick, RNG finished the series with another impressive showing from Setsu who dominated the net worth chart with his Templar Assassin along with Du “Monet” Peng’s Lifestealer as they shut down Newbee’s Morphling strategy.

In an intense best-of-five series, MAD Lions played their best LoL of the year, taking down the number one seed in a thrilling game five that saw them snatch victory from the jaws of defeat after fending off an almost successful backdoor attempt from G2.

iG are back on top in the LPL

Invictus Gaming retook the top spot in Week 5 of the LPL, winning all three of their matches, including a pivotal reverse sweep against heavyweights Royal Never Give Up.

After falling in the first game of their series against RNG, the 2018 World Champions regrouped for game two, led by Kang “TheShy” Seung-lok on Vayne. TheShy put on a clinic, and was a thorn in the side of RNG for the entire game. He ended the game with a quadrakill.

iG went on to win game three to claim the series, moving back into first place in the LPL with a 10-1 record.

While the CPT is on hold, Sako has trained up a monstrous Seth

With Capcom’s decision to remove the entire first half of the 2020 Capcom Pro Tour season from the schedule due to the ongoing COVID-19 novel coronavirus pandemic, pro players like Naoto “sako” Sako have been relying on online ranked matches to keep their skills sharp and train up new characters.

In one recent match, Sako showed off his new Seth skills as he pulled off a clutch comeback by throwing his opponent into the corner and then landing an insane game-winning combo with Seth’s Tanden Maneuver V-Trigger II activation that led into a Tanden Destruction Critical Art finish.