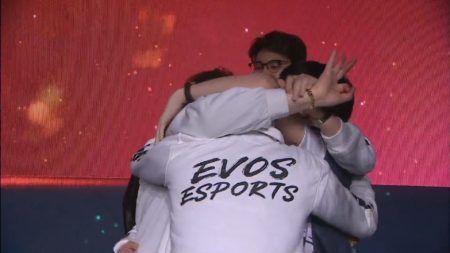 Todak got off to a quick start, taking game one in just over 17 minutes. However, EVOS struck back in game two, with Andrew “Potato” Lim having an outstanding game. The teams continued to trade wins, with Todak taking game three, and EVOS taking game four.

With the score tied 2-2, the entire tournament came down to one final game.

With everything on the line, both teams pushed hard, but neither could take an early advantage. However, at the 22-minute mark, a huge team clash over the Lord resulted in EVOS’ Robert “OhDeerBambi” Boon and Potato landing the killing blows on three Todak players.

With just one player left to defend Todak’s base, EVOS wasted no time and went straight for the Inhibitor, taking it out a few minutes later to win the trophy.

Adel “Big Bird” Anouche had an incredible weekend at EGX 2019 in London, winning both the EU Regional Open tournament and the EU Regional Finals with his signature Rashid.

In the Regional Open tournament, he defeated Arman “Phenom” Hanjani’s Karin in the grand finals, 3-1, pulling off an incredible V-Trigger mix-up in the final round to close out the match.

Big Bird dominated the grand finals from start to finish, and had Infexious trapped in the corner for the majority of the set. In the final round, Big Bird again had Infexious on the ropes, and closed out the match with a stylish Critical Art finish.

For his two tournament wins, Big Bird went home with US$14,000, and a guaranteed spot in the Capcom Cup.

While Alliance breezed through the tournament’s group stage and swept Ninjas in Pyjamas (NiP) in the playoffs to make it to the finals, Demon Slayers lost all of their group stage matches and had an uphill climb from the lower bracket.

However, the plucky North American squad managed to find their form, toppling the more established teams of J.Storm, Team Liquid, and NiP en route to their showdown with Alliance.

With momentum on their side, Demon Slayers got off to a great start, taking the first two games in the series, thanks to commanding performances from Danny “iAnnihilate” Cote on Ember Spirit and Hang “oldWhite” Zhao on Sand King in game one, as well as Guilherme Silva “Costabile” Costábile on Lycan in game two.

But with their backs against the wall, Alliance started firing on all cylinders and took game three to start turning the series around, with their core trio of Nikolay “Nikobaby” Nikolov, Linus “Limmp” Blomdin, and Neta “33” Shapira all notching nine kills apiece.

Alliance rising star Nikobaby then ran roughshod all over Demon Slayers in game four, putting up a superb 12-0-8 KDA to send the finals to a deciding game five.

Despite a valiant defense by Demon Slayers in the final game, Alliance could not be denied. Nikobaby was key to his team’s victory once again, posting another excellent KDA of 12-1-13 on Gyrocopter.

With top European teams in OG, Team Secret, and the ex-Liquid roster (Kuroky and co.) sitting out the first Major cycle, Alliance are looking like the strongest team in the region right now.