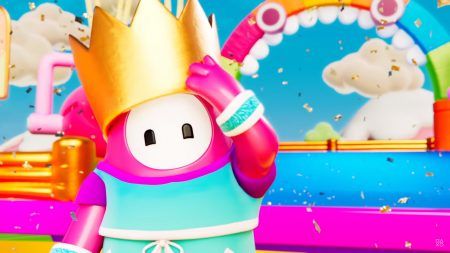 With the Fall Guys: Ultimate Knockout making waves as the hottest battle royale around right now, not to mention its potential to be a major competitor in the esports space, dataminers everywhere are trying to find the next surprise in store for the game’s growing fan-base.

The latest leak, thanks to dedicated Fall Guys leaker — HYPEX — reveals upcoming collaboration skins for Portal and My Friend Pedro.

Both have yet to be revealed or confirmed by Devolver Digital or Mediatonic, Fall Guys’ publisher and developer respectively. To-date, the leaks that HYPEX had put out are on point, with the just released Bulletkin skin being leaked two weeks ago.

The leak from HYPEX revealed what the costume sets look like for Portal’s Chell and Pedro, the main character for My Friend Pedro. It even showed the rarity and price-tag for each costume — 5 Crowns, the in-game currency for Fall Guys.

HYPEX, somehow, managed to secure the release date as well:

Right now, there are a ton of collaboration costumes, some of which represent major pop-culture content, such as the Gordon Headcrab and Alyx skins from Valve’s Half-Life. In fact, the latest collaboration skin is Team Fortress 2’s Scout.

Fall Guys: Ultimate Knockout is now available on the Sony PlayStation 4 and for the PC via Steam. There are now rumours of a mobile variant being developed for China’s video games marketplace.