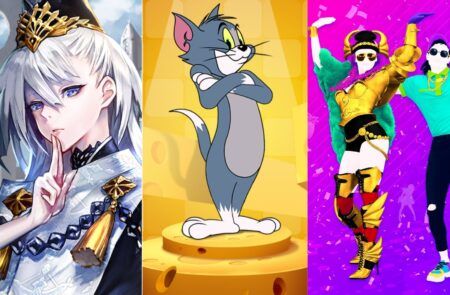 Esports fans know that games like Dota 2, LoL, Mobile Legends, and Valorant are pretty much mainstays in the scene, but did you know about the Tom and Jerry SEA Invitational? Or that the card game Shadowverse has a US$1,000,000 grand prize?

No? Well in that case, allow us to introduce you to five esports you’ve probably never heard of.

N.B. To be clear, these aren’t random one-off tournaments we’re talking about here (like that Shaq Fu tournament held at PAX East one year), these are games with an active tournament scene and hefty prize pools. You could conceivably turn pro in any of these games.

This isn’t one of the immediate titles that come to mind when you think “esports”, but Shadowverse is actually incredibly popular in the Asia Pacific region, especially Japan.

Shadowverse is a free-to-play digital collectible card game, that on the surface, looks like Hearthstone for weebs. It has a huge competitive scene that’s been steadily growing since the game’s release in 2016, with several tournaments in various countries.

One of the biggest tournaments, the Shadowverse World Grand Prix, was postponed in 2020 due to the pandemic, but will resume in Japan in June 2021 with a grand prize of US$1,000,000 for the grand champion!

Before you think this is becoming just a list of games that are huge in Japan, Catherine’s competitive scene is actually pretty intense.

The game is about a troubled man caught between two women, but within the game is a multiplayer mode that took on a life of its own. The game mode is a best-of-3 race to the top of a tower of blocks, that looks like Jenga on a case of energy drinks.

The community that grew out of this mini-game became so intense and organized, spanning from the US to Australia, that it caught the attention of the Evolution Championship Series in 2015. Today, the game is pretty much a mainstay at EVO and the fighting game scene.

The Just Dance World Cup has been held by Ubisoft since 2014, and we’re not sure why this hasn’t taken off like crazy.

The tournament feels like a cross between a talent/variety show and an esports competition. While the winners advance through Just Dance points, the panel of three judges has a say in it as well, much like American Idol. To top it off, the audience vote also matters, all the way up to the grand finals.

The 2019 Just Dance World Cup was held in São Paulo, Brazil with Umutcan Tütüncü, a dance teacher from Turkey, winning the championship for the third time in a row since 2017. The Just Dance World Cup took a break last 2020 (like many live events), but hopefully, it’ll back for 2021!

You might be familiar with GWENT from The Witcher series, but you might be surprised to know that it actually has an extensive tournament scene.

GWENT Masters is the official esports series for the spin-off card game, and has three tiers of events: qualifiers, open, and the World Masters tournament.

Last year’s World Masters tournament had a prize pool of US$50,000, and winning the lion’s share of that was Aleksander “Pajabol” Oweczarek, who was crowned as the Season 2 champion last December 2020. The next season of GWENT Masters begins this January.

We’re not making this up. Tom and Jerry have gone from the childhood cartoons we know and love to their esports debut in NetEase’s Top Clans 2020 tournament.

With a SEA invitational and a prize pool of US$20,000, the group stages followed a best-of-3 double-elimination format, with 16 teams participating. Teams are assigned “cat” or “mouse” roles, much like attacking and defending sides in other esports titles.

The first-ever Tom and Jerry: Chase champions? Team Be8ind from Thailand. It sounds surreal, but the production is polished and professional, and with NetEase supporting the game, the Tom and Jerry esports community is bound to keeping growing.

READ MORE: LPL is finally getting a double elimination playoff bracket this Spring 2021