FaZe Clan could now be in trouble with the U.S. Department of Labor. 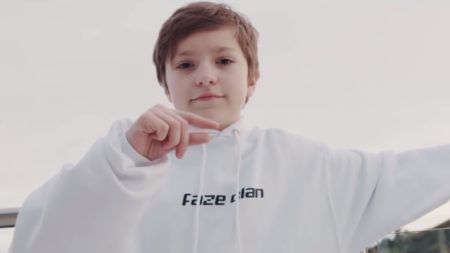 FaZe Clan may be about to face more problems than just Turner “Tfue” Tenney suing them.

Like Tfue, Patrick, or “H1ghSky1” (full name unknown) is one of FaZe Clan’s Fortnite streamers with around 500,000 followers on Twitch. However, as documented in Tfue’s lawsuit against Faze, H1ghSky1 was allegedly only 11 when he signed his contract with FaZe.

This would make him ineligible to operate a Twitch channel or enter any Fortnite tournaments, both of which require you to be at least 13. According to Tfue’s complaint, FaZe Clan “pressured the minor and his family to lie about his age.”

FaZe Clan’s introduction video for H1ghSky1 in March this year also curiously never specifies his age, despite the video being titled “Meet the youngest FaZe member ever” and his young age frequently being brought up.

Today, H1ghSky1’s Twitch channel was terminated without any official explanation or infractions against him. The only possible reason for this is that Twitch has now confirmed that he is indeed under 13.

FaZe Clan may also be facing further legal issues if H1ghSky1’s actual age has been confirmed, as the esports organization could be in violation of US labor codes if the streamer was only 11 when he signed his contract, specifically the Fair Labor Standards Act.

The U.S. Department of Labor insists that the FLSA is “designed to protect the educational opportunities of youth and prohibit their employment in jobs that are detrimental to their health and safety”.

Neither FaZe Clan nor H1ghSky1 have issued a statement yet on the matter.