The Honor 20 will come with the Honor Wonder Fortnite skin

It comes in purple and teal hues though. 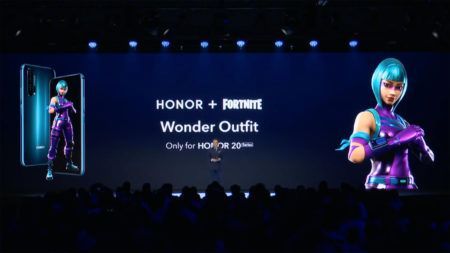 Good news, Fortnite fans. Honor’s latest phone, the Honor 20, will come with an exclusive skin, similar to an earlier promotion with the Honor View 20 and the Honor Guard skin.

This time around, it’s the Honor Wonder and it features purple and teal hues similar to the Honor 20 and Honor 20 Pro phones that were being launched.

While there’s no known details on how Fortnite players can claim the skin, we can probably expect more information once the phone is officially released on June 6.

Honor also revealed a one-handed controller attachment at the launch. It has a simple control layout, a clip-on attachment for the phones, and connects via Bluetooth 5.0.