With 167,000 peak concurrent viewers, Ninja is still the most popular streamer in the world. 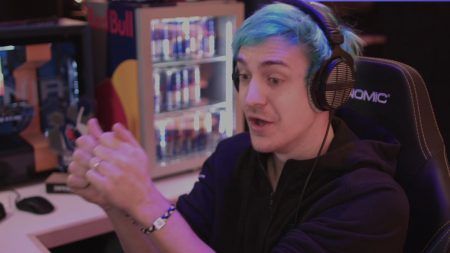 Massively popular Fortnite streamer, Tyler “Ninja” Blevins has begun streaming via YouTube, following the news that Microsoft had shut down Mixer. His first stream on the platform premiered on July 8.

Earlier in the day, Ninja posted a cryptic tweet that simply read, “One hour,” before sharing a YouTube link to a scheduled Fortnite session with fellow Fortnite streamers Jack “CourageJD” Dunlop, Benjamin “DrLupo” Lupo, and Tyler Timothy “TimTheTatman” Betar. The group played for about an hour, as Ninja reflected on his sudden hiatus.

“Thank you so much for watching this first-ever incredible YouTube stream, I didn’t really know what to expect,” Ninja said at the end of the video. He then added that there would be “a lot more streams sooner rather than later.”

Ninja previously made waves in 2019, when he left Twitch for an exclusive deal with Mixer. However, his contract prematurely ended in June when the platform was closed down.

Ninja reportedly declined an offer from Facebook Gaming, and has since been posting updates on his YouTube channel. Since his exit, he has been grinding nonstop on Valorant, playing with former Apex Legends pro and T1 streamer, Michael “sonii” Sherman.

Ninja’s first stream amassed over 2.5 million views, while the live stream itself peaked at 167,000 peak concurrent viewers. Though it’s unclear whether he will be signing with the Google-owned site, it has been reported that Ninja is currently in negotiations with various streaming platforms.

This stream, likewise, follows the placement of three of the biggest video game streamers in something of a virtual limbo. Mike “Shroud” Grzesiek also became a free agent after Mixer’s closing, and has gone silent on all his social media platforms as a result. Meanwhile, Guy “DrDisrespect” Beahm has been notably absent since he was banned from Twitch for unknown reasons.

READ MORE: Ninja and Shroud could return to Twitch as Microsoft shuts down Mixer