The sidegrade feature in the v11.40 patch lets you trade in materials for a better weapon. 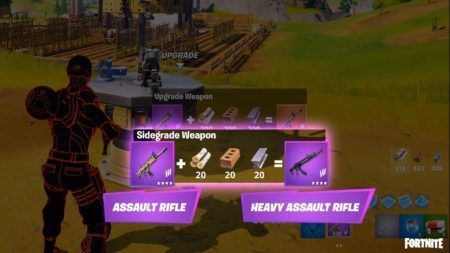 Upgrade stations found on the island will now offer a better weapon in exchange for a certain number of materials.

For example, players can unlock the Heavy Assault Rifle by going to a Weapon Upgrade Bench, and trading-in materials.

The Sidegrading feature is only available in non-competitive playlists at the moment.

The Weapon Upgrade Bench feature was initially added to the game during Fortnite’s Chapter 2 patch. But it only allowed players to upgrade their preferred weapons into higher rarity, which cost plenty of materials.