Fortnite Chapter 2: Absolutely everything you need to know

It’s a brand new world out there. Here’s everything you need to know about it. 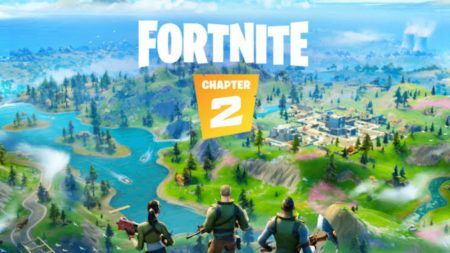 After a brief period where everything in the game was sucked into a black hole following the conclusion of Season X, Fortnite: Battle Royale returned for Chapter 2 with a revamped map and a slew of new features.

Epic Games notably withheld from releasing any patch notes that listed the changes that came with the update, telling players to go out and discover everything for themselves instead. But if you don’t have the time for that, we’ve got you covered with this one minute video:

For a more in-depth look at everything new in Fortnite Chapter 2, read on:

A New Island for the New Chapter

The biggest change with Chapter 2 is no doubt the all-new map. As you’ve probably already noticed, water features prominently on the new island. That ties in with features introduced in the update, such as the new fishing mechanic and boat vehicle, but we’ll get to that later.

Not all locations from the original map are gone however, as Pleasant Park, Salty Springs, and Retail Row have survived the black hole.

With all that water in the new map, players can now interact with the environment in new ways. You can swim in any body of water, from the two lakes and the myriad rivers that feed them, and even to a part of the open sea surrounding the island.

You can also fish in any water on the map using the new fishing rod item. You can snag anything from fish, items, weapons, and trash (pollution is unfortunately a thing in Fortnite too, it seems).

While you can swim along the rivers to get from place to place, it’s not exactly the fastest and safest means of traveling by water. There are exactly 23 boats scattered all around the map near bodies of water, with eight easily accessible ones in the two lakes.

Each boat can carry a full squad of four players but only has 800 health, although they do come equipped with a rocket launcher for protection.

While you are expected to use the boats in the water, you can drive them on land as well. Doing so slowly ticks away at the health of the boat however, depleting one damage per second, so try to remember that boats are meant to be used in the water.

Fortnite Chapter 2 also adds new depth to gameplay by introducing hideouts and environmental explosives. Players can now jump into places like haystacks and dumpsters to literally get a jump on their enemies. You will take to the air when exiting your hideout, so use that to your advantage to land some critical hits.

If you don’t want to be sneaky, you can blow up environmental explosives such as gas tanks and explosive barrels to go in guns blazing. You can also fish for the Mythic Gold Fish, which can be thrown to deal 90 damage to enemies like a grenade.

No, we don’t mean the deadweight teammates you’re always carrying, one of the most interesting new mechanics in Chapter 2 is the ability to literally carry downed players.

While the obvious use for this is to carry fallen teammates to safety, you can also use it on enemies to throw them off a cliff. Fortnite’s internal files name this action as a “Yeet” and players can earn the “Nice to Yeet You” achievement by doing so.

A hidden aspect of the new carry mechanic is that, somewhat counter-intuitively, you will move faster when carrying another player, be they an ally or an opponent. While it is unsure if this is an intended effect, do try to use it to your advantage.

The Slurp Juice has been vaulted for Chapter 2, but Epic has implemented new ways for players to sustain themselves using the environment. Players can now find Slurp Pools around the map that heal them just by standing in it, while scattered Slurp Containers can be destroyed to provide minor healing.

Fishing can also be used to sustain yourself, as catching and consuming different kinds of fish provides varied amounts of healing. For example, Small Fries and Floppers heal 25 and 50 HP respectively, while the Slurp Fish gives 50 shields upon use.

Alternatively, players can find the new Bandage Bazooka weapon that shoots bandages that heal for 25 HP until max health is reached. You can shoot it at other players to heal them, or aim at your feet or bounce the projectile against a wall towards you to heal yourself.

For Fortnite Chapter 2, Epic wants players to have a “streamlined weapon arsenal” by only putting in basic weapons and introducing a weapon upgrade system.

You can then use an upgrade bench to upgrade your weapons at the cost of materials. The material requirements for upgrading from one rarity tier to another are as follows:

Now that you know what to expect from Fortnite Chapter 2, why don’t you get on the Battle Bus and drop in?