The Driftboard will let players do cool tricks in the new Driftin’ Limited Time Mode. 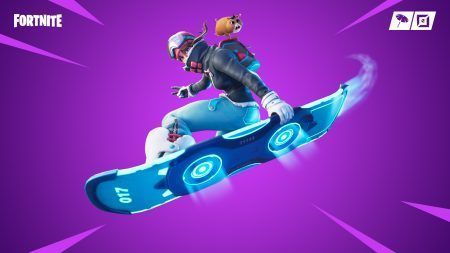 The Driftboard can be found scattered across the map and will let players fire weapons, use consumables, loot, revive downed allies without getting off of it. You cannot build while on the Driftboard, however.

Mobility. Style. Flare. Put your own spin on the game with the new limited time Driftboard! pic.twitter.com/07QJxIHX0u

Aside from providing a significant movement boost to players, the Driftboard also lets them pull off some stylish tricks as they ride the slopes.

The Driftboard will be paired with the aptly-named ‘Driftin” limited time mode, where players race with their teams to eliminate enemies, with the last team standing winning.

Each team will have 32 players, and they can get Driftboards, as well as weapons and ammo, from Red Supply Drops that will fall all over the map.

Because of the abundance of supply drops, all Chests and Ammo Boxes have been removed.

Players would want to stay on their Driftboards at all times, as their Health and Shields will slowly regenerate while riding them.

Another limited time mode included in this content update is ‘Catch!’ which removes all guns from the game except for grenades and throwable weapons.

Faster circle times are also implemented in this mode, so players will have to either blow their opponents to smithereens or toss them out of the rapidly narrowing playzones.

Players can only use Smoke Grenades, Clingers, Remote Explosives, Port-a-Fortsm, Impulse Grenades, and Shockwave Grenades in this mode.

Chest spawns and Floor Spawns have been set to 100, with Supply Drops becoming more frequent as well, as players can only get consumables out of them.